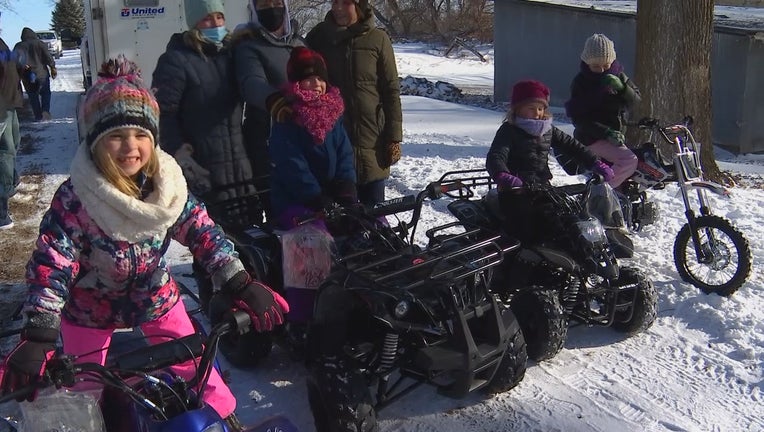 Liza Turrittin and her five kids, ages 2 to 11, lost their husband and father Cole this spring, when he died from cancer. (FOX 9)

ST. PETER, Minn. (FOX 9) - A family in St. Peter got a Christmas Eve surprise on four wheels after a heartbreaking year.

Liza Turrittin and her five kids - ages 2 to 11 - lost their husband and father Cole this spring, when he died from cancer.

A family in St. Peter got a Christmas Eve surprise on four wheels after a heartbreaking year.

That's where another family came in. For the past five years, Mac Johnston, who owns East Central Sports in North Branch and Burnsville, has been gifting four-wheelers to families who have experienced tragedies.

Johnston and his dad drove 250 miles round trip from their home to St. Peter Thursday morning to complete the surprise after a friend of Liza Turrittin nominated the family.

"It’s not easy to pick the stories, but this one was pretty easy to figure out," Mac Johnston said. "They're never going to get their dad back, but hopefully this can make it a little bit better."

Wednesday's blizzard combined with Thursday morning's subzero wind chills to make the surprise a bit tougher to pull off. After wheeling three four-wheelers and a dirt bike off his trailer, Johnston had to let the batteries warm up before their new owners could power them up.

No matter. The kids wore big smiles on their faces as tears rolled down their mom's face.

"This is so awesome. Thank you," Liza Turrittin said, hugging Emily Schoper, the friend who had nominated her.

"Through everything so far I’ve told everybody the one thing that gets me through is the love from everybody," Turrittin said.

Schoper, who owns a salon in St. Peter where the Turrittins have been clients, said it was an easy choice to nominate the family.

"They used to sit at the table and Cole would ask them every night, 'What did you do for someone else today? What did you say? Did you do something kind?' I just felt like this was the way we could give back," Schoper said.