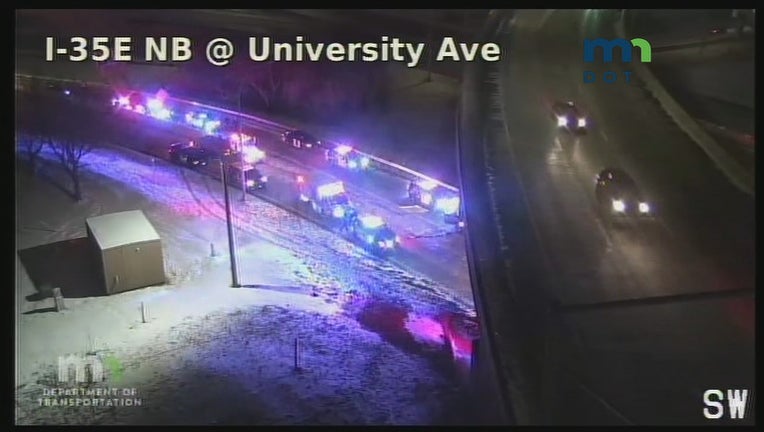 A spree of robberies Wednesday evening ended with a police chase and a crash in the area of I-94 and I-35E. (Supplied)

ST. PAUL, Minn. (FOX 9) - Two teens are in custody after a string of robberies and carjackings in St. Paul ended with a police chase and crash involving an ambulance on Wednesday.

St. Paul police say the string of robberies started around 6:15 p.m. Wednesday. Within the next three hours, police say there were five robberies, including two carjackings, with all of the incidents involving two male suspects in a dark-colored SUV.

Around 8:50 p.m., police say officers spotted the SUV in the area of 3rd Street and Bates Avenue. Officers tried to stop the vehicle but say the drivers took off with squads following.

According to officers, the drivers led police on a chase that ended when their vehicle struck an ambulance in the area of I-94 and I-35E. Police say no one in the ambulance was injured in the crash.

The suspects then jumped out of the SUV and tried to flee on foot but were quickly arrested by police.

Police say the suspects, a 15-year-old boy and a 17-year-old boy, are now facing charges for robbery and auto theft.

A St. Paul business owner called out city leaders after five robberies at his restaurants over the past few months, the most recent of which happened Sunday at The Gnome.

The St. Paul Police Department says the arrests were part of what has been a busy week for officers that have responded to 2,500 calls since Monday morning, and as business owners have expressed concerns over increased crime in St. Paul and across the metro.

"It was quite a night," police wrote in a Facebook post. "We’re proud of the work our officers did and thankful nobody was seriously (physically) injured.