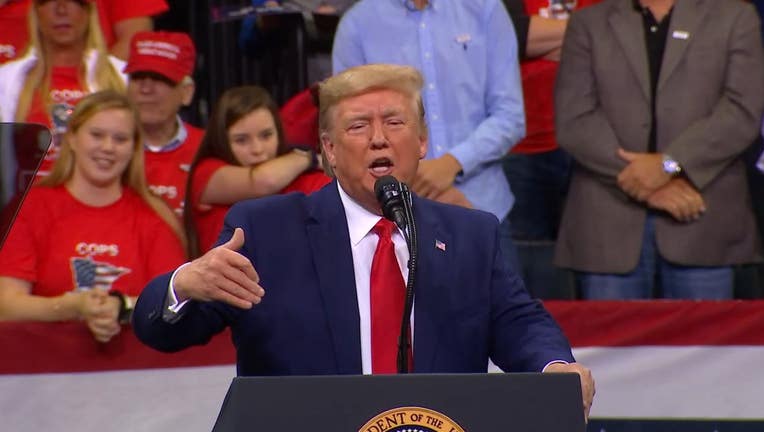 President Donald Trump speaks at a campaign rally in at the Target Center in Minneapolis on October 10, 2019.

MINNEAPOLIS (FOX 9) - President Donald Trump made a number of inaccurate or inflated statements during a 102-minute campaign speech in Minneapolis on Thursday night, a FOX 9 analysis has found.

During one of the longest speeches of his presidency, the president lashed out at House Democrats for launching an impeachment investigation against him, hammered political rival Joe Biden, and boasted about his crowd size.

Some President Trump claims were inaccurate, inflated at Minneapolis rally

President Donald Trump made a number of inaccurate or inflated statements during a 102-minute campaign speech in Minneapolis on Thursday night, a FOX 9 analysis has found.

The president has made clear that he wants to win Minnesota in 2020 after losing to Democrat Hillary Clinton by 1.5 percentage points in the 2016 campaign. He has visited the state four times in the past year and a half, but Thursday’s crowd was his biggest Minnesota audience to date.

It’s fair to say that the crowd inside Target Center was around 20,000. Minneapolis Fire Department Assistant Chief Bryan Tyner said the venue could hold about that number. Target Center hit capacity and an unknown number of people were turned away from the event, Tyner told FOX 9 in a telephone interview Friday.

Most of the arena’s 19,356 were full at the start of Trump’s speech, and some supporters stood on the arena floor. But the crowd – especially in the upper bowl – dwindled as he spoke.

It’s unclear what record the president was referring to. Target Center’s website says its record attendance at an event was 20,200 for a U2 concert in 2005. And the Minnesota Timberwolves’ attendance record is 20,412, set at a game against the Golden State Warriors in 2017, said Dan Bell, a team spokesman.

The president’s claim of 25,000 people standing outside was inflated. FOX 9 crews stationed outside the arena saw a few hundred people watching the speech in an overflow area.

Trump’s speech marked the first time he’s held a campaign rally since House Democrats began an impeachment investigation against him last month. He devoted a significant portion of the speech to the impeachment issue, defending himself after pushing Ukrainian officials to investigate political rival Joe Biden.

“My phone call, as an example, with the president of Ukraine was perfect,” Trump said, adding that “everybody that looked at it” agreed.

Hours before the president’s Minneapolis speech, The Washington Post reported that four national security officials had sounded alarms before and after the call about Trump’s actions. Text messages released to journalists indicate that some diplomatic officials had raised concerns that the president was seeking political help in exchange for an official Ukrainian visit to the White House.

The president has denied a quid pro quo.

Trump also sought to defend his record on his signature 2016 campaign issue, building a wall on the U.S.-Mexico border.

“We are building the wall faster than anyone ever anticipated it could be built,” he told supporters Thursday night.

Independent fact-checkers have found the Trump administration has rebuilt miles of border fencing. But a wall along the entire border remains only an idea because of fights with congressional Democrats, the high cost, and legal fights over his plan.

The president repeated an oft-mentioned claim that he’s lost a significant amount of money since he won office.

“I tell you, it’s cost me billions of dollars to be president. It really has,” Trump said. “At some point, I’ll probably have to prove that, and I look forward to – it’s very easy.”

Trump has previously said he had lost $3 to $5 billion since becoming president, an assertion that Forbes – which produces a yearly estimate of wealthy individuals’ net work – said was an inflated figure.

Trump’s net worth has declined by an estimated $1.4 billion since 2015, the year he declared his candidacy for president, though only $200 million of that can be directly tied to the presidency, Forbes said.