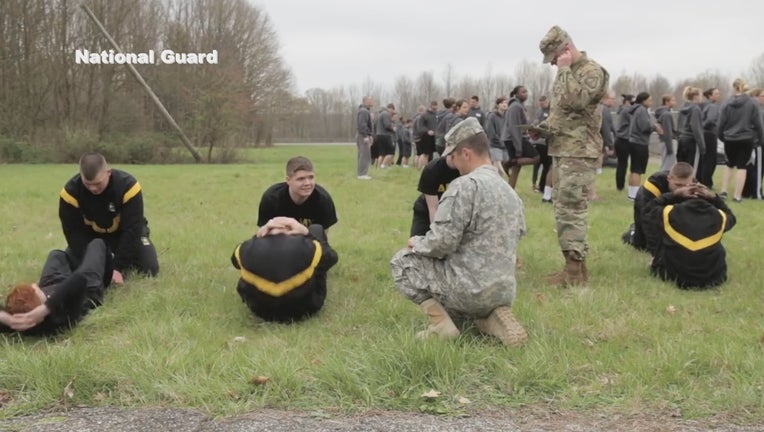 Soldiers with the National Guard train by doing sit-ups.

(FOX 9) - A Minnesota National Guard soldier told FOX 9 he believes leadership is putting hundreds, if not thousands, of soldiers at risk for contracting and spreading COVID-19.

A Minnesota National Guard soldier told FOX 9 he believes leadership is putting hundreds, if not thousands, of soldiers at risk for contracting and spreading COVID-19 during their training.

Speaking anonymously for fear of retribution, the soldier raised concern over the physical fitness test.

While the Minnesota National Guard is allowing all valid tests to remain valid until further notice, the soldier says those who are testing are at risk. He points to the sit-up portion of the test, where soldiers are face-to-face often without masks on.

“When somebody sits up during the exercise, you breathe directly onto their face, you can’t help it. It’s a strenuous activity,” he said.

Major Scott Hawks, a spokesperson for the Minnesota National Guard told FOX 9 that they are allowing for alternate means for holding the feet during sit-ups in order to maintain social distance and that the only soldiers testing right now would be those who failed, as all valid tests are remaining valid until further notice.

But the soldier says there are other issues. Namely, he says when they do overnight drills at Camp Ripley, they are packed into the barracks where social distancing is impossible.

“You’re not able to distance, you’re not able to realistically keep far enough away from each other or prevent spreading,” he said. “There’s going to be an outbreak in the Guard because of this.”

Hawks said there are various COVID-19 precautions in place at Camp Ripley, but that the nature of military training and service is not always conducive to these precautions.

In a statement, Hawks said in part, "The National Guard must train and balance risk to our members in order to meet mission requirements and protect the people we serve in our local communities, state and nation."

Hawks could not comment specifically on the soldier’s claims, as he didn’t identify which unit he was in. Hawks did however acknowledge that commanders have been given some discretion when it comes to if and how to administer physical testing during the pandemic.

Both the Navy and Air Force have suspended all physical tests until January 1.