A 23-month-old was killed in a crash involving a pick-up truck and a school bus in Arden Hills Monday morning.

(FOX 9) - A 23-month-old was killed in a crash involving a pick-up truck and a school bus in Arden Hills Monday morning.

The Ramsey County Sheriff's Office says the crash occurred around 8:30 a.m. when a school bus, which was not carrying passengers, collided with the side of a pick-up truck at the intersection of Highway 10 and Highway 96 West.

Traffic cameras captured the aftermath of a crash between a school bus and a pick-up truck. There were no students on the bus at the time of the crash in Arden Hills Monday morning, though four people were injured.

The preliminary investigation shows the school bus was headed East on Highway 96 when it hit the pick-up that was in the westbound lane of Highway 96, attempting to turn left onto Highway 10. A third vehicle ran into the back of the pick-up, but no one in the SUV was injured.

There were four people in the pick-up truck when it was struck; a 31-year-old driver, his 29-year-old wife, their 15-year-old son, and their 23-month-old daughter.

When responding deputies arrived at the scene, they found the 23-month-old not breathing. Deputies performed CPR before medics transported the infant to Regions Hospital. However, life-saving measures were unsuccessful and the girl was pronounced dead at the hospital. 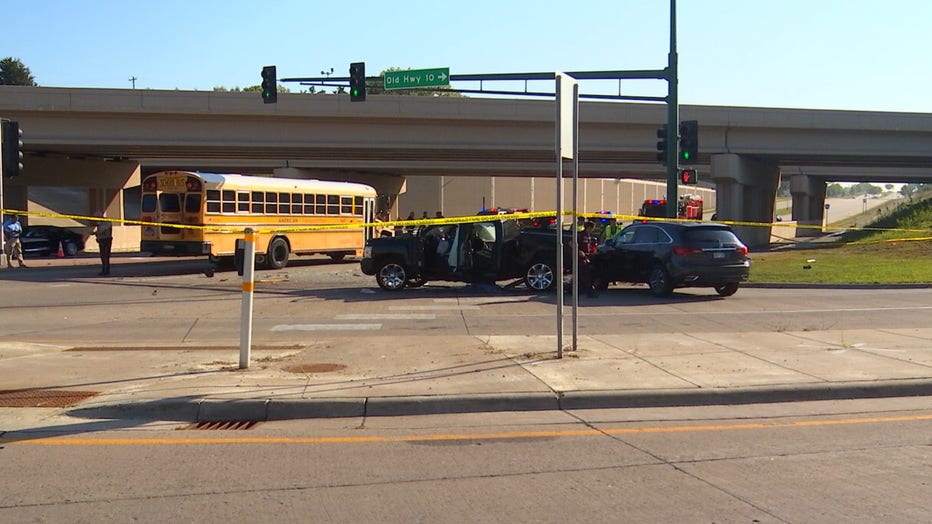 Four people were injured in a crash between a school bus and a pick-up truck Monday morning in Arden Hills. There were no students on the school bus at the time of the crash. (FOX 9)

The two adults were not injured in the crash and the teenager was taken to the hospital with leg injuries.

The driver of the school bus was taken to the hospital as a precaution. The driver did not appear to be seriously injured, authorities said.

Neither driver showed signs of impairment. Authorities say the crash remains under investigation.