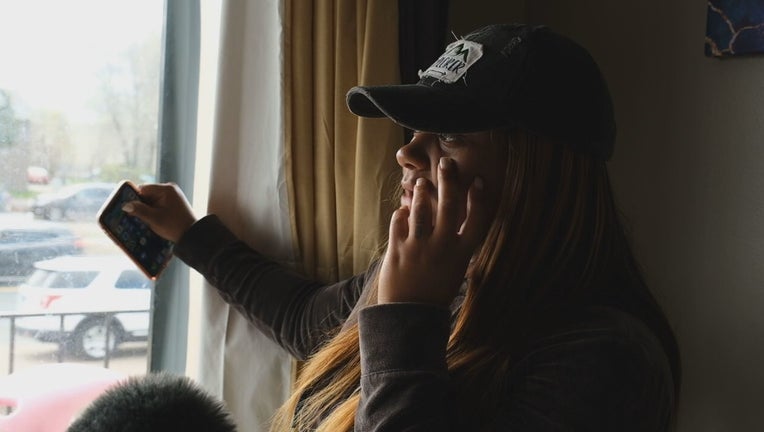 Jamaya Crayton watches from her apartment across the street of the Brooklyn Center Police Department as protesters gather outside in response to the Daunte Wright shooting. (FOX 9)

BROOKLYN CENTER, Minn. (FOX 9) - Residents who live in the apartments across the street from the Brooklyn Center Police Department are getting caught in the crossfire, as police clash with protesters on a nightly basis.

"I never experienced war until now," said Johnny Tolliver, an apartment resident. "This is like being in a war."

Residents near Brooklyn Center Police Dept. caught in the crossfire of ongoing protests

Residents who live in the apartments across the street from the Brooklyn Center Police Department are getting caught in the crossfire, as police clash with protesters on a nightly basis.

Every day and night, Tolliver stands guard at the front door of his apartment building to keep out both protesters and police.

"The only things we're doing is keeping these doors secure and keeping us safe from the crowd running in here and the police running after them, to protect against the looting and the vandalism, to protect what we have," he said.

For the last few nights, demonstrators upset over the police shooting of Daunte Wright have clashed with law enforcement in front of the Brooklyn Center Police Department, which is right across the street from the Sterling Square Apartments. With all the chaos playing out on their front door step, many residents feel like they're caught in the crossfire.

Jamaya Crayton captured cell phone video of the unrest. It’s a snapshot of what she sees from her second story apartment every night.

"It's like a war going on in the middle of your front yard and there is nothing you can do," said Crayton.

The other day, she found a rubber bullet shell on her balcony. She says all the loud noises are particularly upsetting to her three-year-old daughter and two young nieces who have autism and don't understand what is happening.

"I'm tired," said Crayton. "I'm tired every day. I haven't gotten any sleep my kids are coughing. They are uncomfortable, scared and it’s really pissing me off because there is nothing I can do."

"You are supposed to protect your kids, but there is nothing I can do," she added.

Tolliver doesn't want to stay anywhere else and leave his apartment unprotected, so he'll spend another sleepless night standing guard in a war he never asked to have a front row seat for.

"I hope this soon goes away and we can get some rest and go back to some kind of normalcy," said Tolliver.