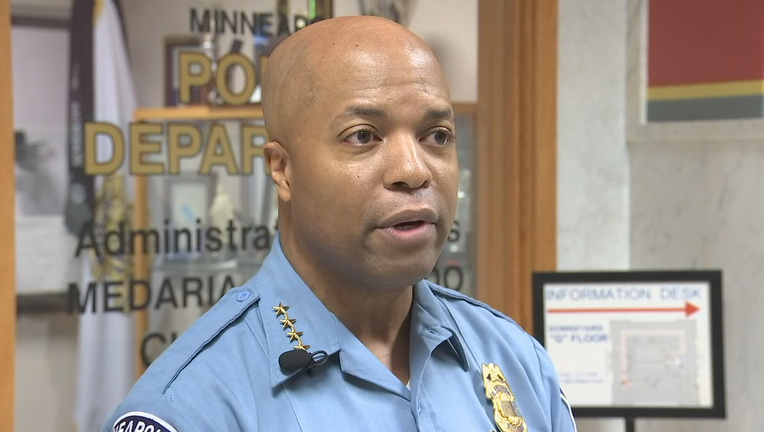 Chief Medaria Arradondo announced a policy change which prohibits police from wearing their uniforms when endorsing a candidate. (FOX 9)

MINNEAPOLIS (FOX 9) - Minneapolis Police Chief Medaria Arradondo announced a change to the police department's uniform policy, which will prohibit police from wearing their uniforms while endorsing a political candidate.

"It's very important for me as chief to ensure our policies are in line with our mission and our values," said Chief Arradondo. "Trust is a part of that. After receiving lots of concerns after last year's election, regarding some of our employees wearing the MPD uniform, I did not want those in our community to feel that the MPD was showing favor or bias to a particular political party or candidate."

The new rule is facing some criticism for suspicious timing with the President set to visit next week, but officials began implementing the rule change after last year's elections.

The policy would not impact officers working at a political event, but rather those who would be making a personal endorsement.

“If the president were to walk across one of the lines and shake the hand of an officer who’s going to be in uniform that’s absolutely acceptable," said Chief Arradondo. "This is more of course focused on specific endorsement or endorsing of a political candidate for a campaign or rally type event.”

The announcement comes just nine days before President Donald Trump will be making a campaign stop at the Target Center in Minneapolis. Chief Arradondo, however, says the policy has been under review for about a year and the change is not connected to the president's visit. When the President Trump's campaign stop was announced last week, Minneapolis Mayor Jacob Frey spoke out against the rally saying the president's "actions have been reprehensible" and his "message of hatred will never be welcome in Minneapolis."

"Certainly the timing of it, it looks as though there's a connection to that," said Arradondo. "I can assure you this has been reviewed, I've been reviewing this policy since last election year. It just so happens the change came about with the recent upcoming visit of our president."

The City of Minneapolis also released an email from a city official discussing the plans to adopt the new policy. The email was dated several days before Trump's visit was announced publicly. Minneapolis Police Federation President Bob Kroll, however, says he still believes the announcement of the new policy was in response to the president's campaign stop.

“It doesn’t take over a year to develop policy and if that was in the works it’s been in the works since election time this year so why just right after the president’s announcement does it change?” said Kroll.

A lawyer representing Minneapolis Police Federation sent a letter to Chief Arrandondo Tuesday challenging the new policy, claiming Kroll did not receive the proper notice before the change was adopted.