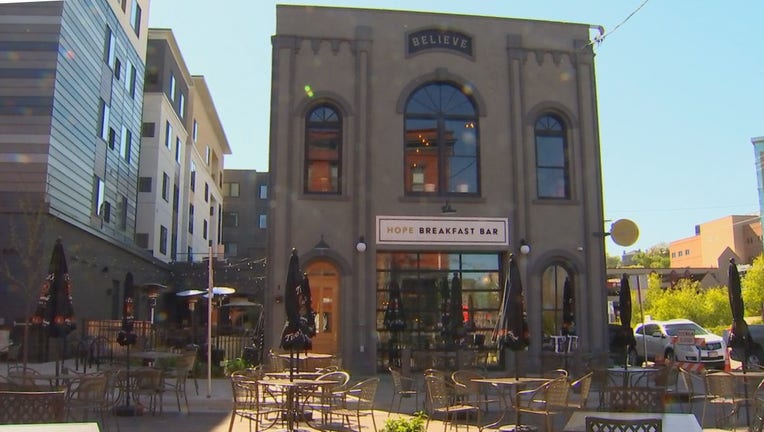 The exterior of Hope Breakfast Bar in St. Paul.

ST. PAUL, Minn. (FOX 9) - A St. Paul restaurant owner is raising concerns after he says his business has been broken into at least six times in the last six months.

Brian Ingram received a call Tuesday morning from one of his employees stating that someone broke into Hope Breakfast Bar. He says the people responsible keep targeting the safe.

A St. Paul restaurant owner is raising concerns after he says his business has been broken into at least six times in the last six months.

"I just thought, ‘not again,’" he told FOX 9 during an interview. "This one’s different because they used power tools to get in… saws and whatever they needed to break into it. The brazenness of all of this is scary."

The safe is the least of Ingram’s worries.

"Our cooks are coming in here just 30 to 45 minutes after this robbery. It’s only a matter of time before somebody gets killed," Ingram said.

Ingram adds his business is not the only one that has been targeted more than once. He says he feels city leaders aren’t doing much to address the crime.

Across St. Paul, police say commercial burglaries are up 56% compared to this time last year. A spokesperson from the St. Paul Police Department says the latest incident at Ingram’s shop is under investigation and they are aware of at least two people involved.

Police have forwarded the charges to the Office of the Ramsey County Attorney, but there's not much staff can do at this time as the person involved was found not competent to stand trial by a county judge.

"He is under a conditional release order and required to follow conditions imposed by the court, while the case is suspended," a spokesperson told FOX 9 in a statement. "We have filed a notice of intent to prosecute […] once he is restored to competence. While situations like these can be incredibly frustrating, it is illegal, immoral, and unethical to prosecute people when the symptoms or degree of mental illness are interfering in their ability to participate in their defense."

Ingram is urging city leaders to step in because he and other businesses targeted are at their tipping point.

"We’re all about mental illness and fighting for our community’s rights, but if someone who can have the sophistication to get in and out of a place in three minutes seems like they are fit enough to stand trial…We’re super frustrated that our city attorneys, Mayor Melvin Carter, and the Saint Paul City Council aren't doing anything. The last thing we can afford after coming out of this pandemic is having our guests afraid to come here."

A spokesperson from the mayor’s office said, "The mayor has spoken extensively about our ground-breaking work to build the most comprehensive, coordinated and data-driven public safety system our city has ever endeavored; the national COVID crime wave of the last year makes clear that this work is more urgent than ever."