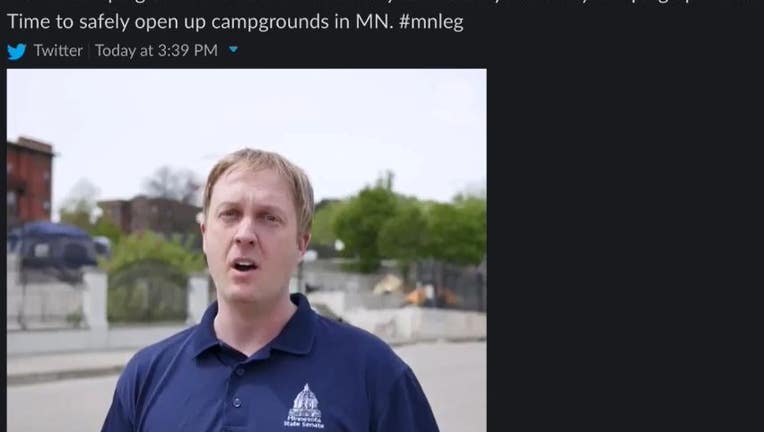 In a deleted video posted on Twitter, Sen. Justin Eichorn compared a homeless camp to recreational camping in order to call for the reopening of campgrounds. (Senate DFL Legislators)

ST. PAUL, Minn. (FOX 9) - A northern Minnesota senator is receiving backlash after posting a video on Twitter in which he uses homeless camps in the Twin Cities to express his belief that campgrounds upstate should be allowed to reopen amid the COVID-19 pandemic.

Sen. Justin Eichorn, who represents District 5, posted the tweet Tuesday evening, but it has since been deleted.

A northern Minnesota senator is receiving backlash after posting a video on Twitter in which he uses homeless camps in the Twin Cities to express his belief that campgrounds upstate should be allowed to reopen amid the COVID-19 pandemic. Video Courtesy: Senate DFL Legislatiors

"And you can see behind me, we've got a nice little tent city set up here," said Sen. Eichorn in the deleted video, while gesturing to a homeless camp behind him. "Unfortunately in Greater Minnesota, Governor Walz has campgrounds shut down. Governor, this is an appeal to you. Please open up campgrounds in northern Minnesota. If you're okay with this, we should certainly be okay with our resorts in Greater Minnesota campgrounds being open."

Senate DFL Legislators issued a joint statement in response, denouncing the video and calling his comparison between the homeless camp and recreational camping as "insensitive, uncaring, and callous."

Eichorn says his video may have "missed the mark," but he believes the approach to reopening should change and is too slow.

"The video posted today was an attempt to convince the Governor to take heed of the dismal economic conditions folks in my district and across Minnesota are facing. In Northern Minnesota, we rely on tourism, timber, and taconite to keep our communities alive, and because of this pandemic, all three industries are struggling immensely. The video may have missed the mark, but Governor Walz's blanket extension of the stay-at-home order only exasperates the pain that my constituency feels. Instead of advocating for a one-size-fits-all strategy, and slowly moving the knobs, I will continue to advocate for Governor Walz to work proactively with businesses across the state who have developed responsible plans that will allow Minnesota to safely open up."

“Living in a tent on the streets because you are experiencing homelessness is not a fun vacation outing. We have a housing crisis – which was exacerbated by this pandemic. Senator Eichorn is using our most vulnerable Minnesotans experiencing homelessness for political posturing. It says a lot about Senator Eichorn's values when he looks at a homeless encampment in St. Paul and his first thought is, "I'm angry we can't go on a camping vacation right now" … not "how can we end the epidemic of homelessness in our state?”

"Most people understand that experiencing homelessness and living in a tent on the street is not the same as recreational camping up North.  No one should have to live in a tent because you can't find an affordable home. Our residents experiencing homelessness should not be used as props to take a cheap shot at our governor, especially during a public health crisis.  That is wrong and immoral.  We need to work together to address the pandemic and the housing crisis, protect the most vulnerable among us, and trust the science and data so we can reopen our state safely.

"To equate and politicize our poorest of the poor who are living in tents on the street, just trying to survive, to camping is insensitive, uncaring, and callous. We expect better. Minnesotans expect better. Justin Eichorn owes every Minnesotan an apology.”