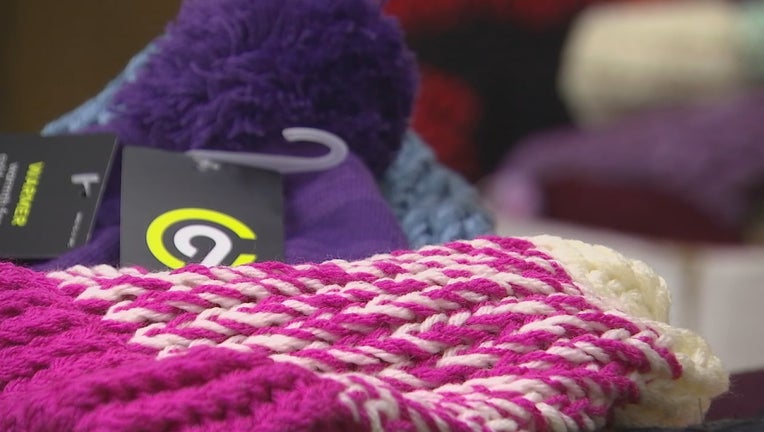 Hats and Mittens officials say the nonprofit is struggling amid the coronavirus pandemic. (FOX 9)

(FOX 9) - Opening up a box from Honolulu, Rebecca Jorgenson Sundquist is thankful for each and every piece of winter gear her nonprofit receives.

She estimates her nonprofit, Hats and Mittens, has collected and given out close to 850,000 new or gently used sets of hats and mittens over the past quarter century.

Opening up a box from Honolulu, Rebecca Jorgenson Sundquist is thankful for each and every piece of winter gear her non-profit receives.

"When I started it I thought I probably can’t solve world hunger, but we can sure keep kids in Minnesota warm,” Sundquist said.

But what’s in stock in now isn’t nearly enough to get through the upcoming fall and winter. Last year, 29,000 sets of hats and mittens were distributed by late February before the pandemic.

In years past, donations boxes are sprinkled by the dozens all across the Twin Cities at places like schools, churches, and workplaces. But with the pandemic and people staying at home more, the fear is these boxes will remain empty.

“There’s so many unknowns,” says Sundquist. “They are not in the office anymore, so they don’t think people are going to be bringing in hats and mittens to collect.”

While potential collection sites are down, demand is already increasing beyond the 120 organizations usually partnered with for distribution.

“So that’s where the squeeze is for us this year,” says Sundquist.

Now the focus is shifting to financial donations and purchasing items for kids and teens this season. Thursday an online auction aims to help.

Twelve-year-old crochet prodigy Jonah Larson is lending a hand from La Crosse and anxious to offer Hats and Mittens his support.

“I was adopted from a very poor region in Ethiopia, and I was saved by my parents who brought me to the United States,” says Larson  “Since I was given a second chance, I want to do what I can to help others, since I was helped by so many."

Sundquist gets emotional reading the countless thanks you notes she receives, while also bracing for the real possibility of some requests going unfulfilled. “A mitten is more than a mitten, that’s what we have to remember.”

For more information about how to donate or place an order request go to their website hatsandmittens.org.