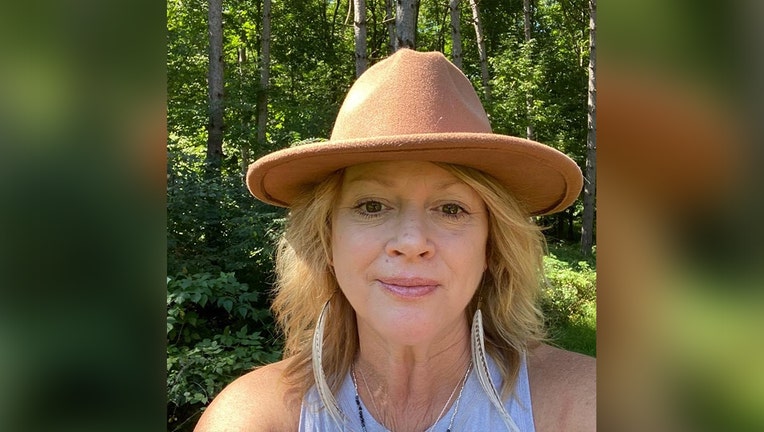 Bridget Dunn, 56, was struck and killed by a car while walking her dog Monday afternoon.  (Dunn family / FOX SOUL)

BLAINE, Minn. (FOX 9) - Authorities identified the woman killed in a hit-and-run crash while she was out walking her dog in Blaine Monday afternoon as 56-year-old Bridget Dunn.

The crash occurred around 12:30 p.m. on 109th Avenue Northeast, mere steps from Dunn’s home. The suspected driver, a 31-year-old Blaine man, initially fled the scene but was later taken into custody. Charges are pending.

Loved ones remember the woman killed in a hit-and-run in Blaine, Minnesota.

Chris Dunn, Bridget’s husband, was at a loss for words after losing the love of his life and mother of their three sons in the crash.

"It’s hard to process something like this, " Chris told FOX 9.

He said the family’s dog, an Irish wolfhound named Sully, ran home after Bridget was struck. He was unharmed.

"Sully was her buddy," Chris said. "From the day we got him, he was allowed up on the bed. Obviously, we have a king-sized bed. So, just doing something we normally did, walk the dog, something senseless like this comes of it. It’s hard to get my head around it."

Flowers and candles now mark the spot where the deadly crash occurred, while spray paint and tire tracks on the grassy shoulder seem to capture the movement of the westbound vehicle.

Bridget's husband and neighbors said they’ve been speaking out about speeds, the lack of sidewalks and their overall safety concerns about the high-speed corridor for a while. Then, this happened.

Neighbors say they've been concerned about safety in the area where a fatal Blaine hit-and-run took place.

"It’s an eye-opener to me to say, ‘hey life is too short to drive fast,’" Chris said. "And we were just talking about it the other day while walking him.... ‘Man, cars really go fast down this street.’ It wouldn’t take much for somebody not to be paying attention to what they were doing."