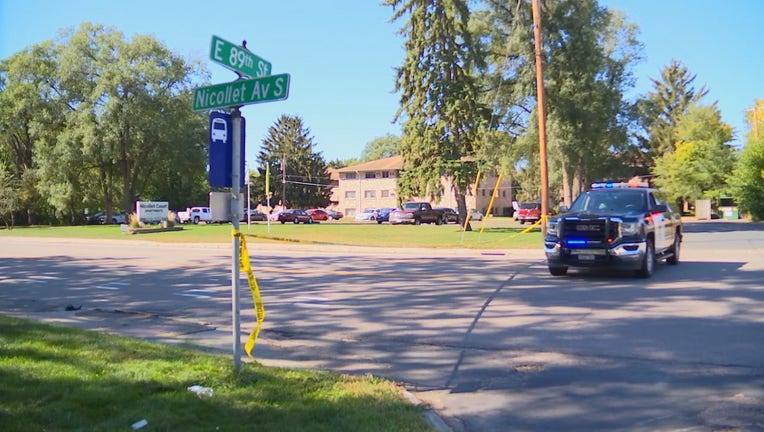 Police are investigating after a body was found in a dumpster in Bloomington.

BLOOMINGTON, Minn. (FOX 9) - A Bloomington man was charged with murder Wednesday for allegedly stabbing his girlfriend, throwing her body in a dumpster and attempting to flee from police with the couple’s toddler in the backseat.

According to the charges, Bloomington police were called to the Nicollet Court Apartments on the 8900 block of Nicollet Avenue South after someone called 911 to report seeing a man dragging a woman’s body through the parking lot and throwing the body in the dumpster.

A man was arrested after a woman was found dead in a dumpster in Bloomington, Minnesota. The man tried to flee police in a car, but was later apprehended and a one-year-old child in the car was released to Child Protection Services.

Officers arrived and located the victim’s body in the dumpster. The medical examiner confirmed the victim had been stabbed several times in the neck and suffered significant blunt force trauma.

At least one resident of the apartment complex witnessed Abdilahi throwing the victim’s body in the dumpster from her window. Several maintenance workers heard the sound of something being thrown in the dumpster and saw the suspect walking away from the scene. One of them called 911 after seeing the body.

Officers followed the blood trail and drag marks from the dumpster to the victim’s apartment, where they saw a knife lying in a large pool of blood.

Several other residents of the apartment complex told officers they had heard a woman screaming for help and heard loud banging noises around 9 a.m.

While officers were at the scene, Abdilahi drove by in his vehicle. Several witnesses identified him as the man who threw the victim’s body into the dumpster. Officers attempted to stop Abdilahi, but he fled. He crashed into a squad car parked at the entrance to the apartment complex as he fled.

Several officers pursued Abdilahi and he led them on a high-speed chase into Minneapolis. Officers were able to stop his vehicle with a PIT maneuver near Nicollet Avenue and 46th Street and take him into custody.

A 1-year-old child was found in the backseat. The child was checked for injuries and released to Child Protective Services.

Police said Abdilahi and the victim were in a relationship, lived together and had a child together--the child that was found in his vehicle when he was arrested. His family told police he suffers from mental health issues.

Abdilahi is currently in custody. He will make his first court appearance on the charges on Thursday.