Footage shows a time lapse of crews working tirelessly to recreate the iconic Field of Dreams ball park in the same location the movie was filmed.

Editor's note: This story originally ran on Aug. 10, 2021 in advance of the first-ever MLB at Field of Dreams game. It has been updated to reflect the details of this year's matchup between the Chicago Cubs and the Cincinnati Reds on Aug. 11. FOX's pregame coverage starts at 6 p.m. ET, and the first pitch is scheduled for 7:15 p.m. ET.

It turns out "Field of Dreams" was right — if you build it, they will come. This week, Major League Baseball will slide into Dyersville, Iowa for the second year in a row for the "MLB at Field of Dreams" game, a nostalgic tribute to baseball and the power of storytelling.

The 2021 matchup between the Chicago White Sox and the New York Yankees marked the first time an MLB game had been played in the state. This year’s event, like last year’s, will bring some of the league’s finest to a new park built to the north of the still-standing field and farm house made famous by the 1989 Kevin Costner film.

But the Reds and the Cubs aren’t the only players in town. For years, Dyersville’s Field of Dreams Movie Site has been home to the Ghost Players, an organization of local former baseball players who perform on the storied field in a free, family-friendly "Harlem-Globe-Trotters-meets-baseball" show. 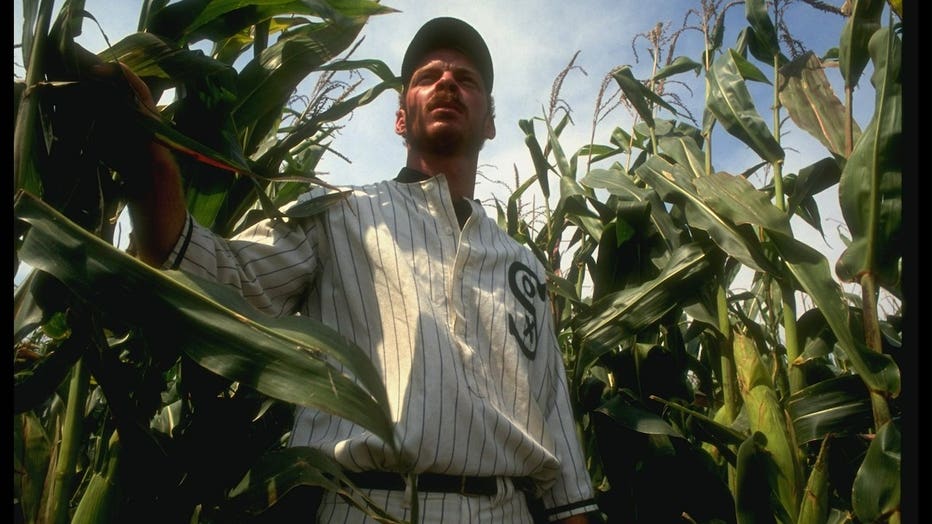 DYERSVILLE, IA - AUGUST 25: A "ghost player" in a vintage Chicago White Sox baseball uniform emerges from a cornfield as he re-enacts the scene at the baseball field created for the motion picture 'Field of Dreams' on August 25, 1991 in Dyersville, I

About "Ghost Player": If you pitch it, they will come

Combining comedy with America’s Pastime, the Ghost Players entertain locals and tourists alike with a rambunctious live show that begins with an iconic image: the players in vintage Sox uniforms, emerging from the corn. Yet even if you can’t make it to Iowa to see the Ghost Players in person, you can still experience the magic first hand thanks to Joe Scherrman’s 2010 documentary "Ghost Player," which is currently streaming for free on Tubi.

WATCH FREE ON TUBI: "Ghost Player"— get the app

The 48-minute documentary explores the history of the team and gives viewers a chance to see the Field of Dreams site as locals see it. But the best reason to watch the doc is for the chance to understand the community created by the classic 1989 sports movie — a community that has since traveled the globe, entertaining audiences and teaching kids the fundamentals of the game.

Indeed, baseball fans wishing to see players round the bases at the film’s actual site should consider streaming "Ghost Player" before the second annual MLB at Field of Dreams game is played. While the game itself will feature many a lovely overhead shot of the movie site, the action will play out at the new stadium, which, unlike the Field of Dreams Movie Site, conforms to MLB standards.

RELATED: 'If you build it they will come': Cubs play Reds at Iowa's historic 'Field of Dreams' matchup

About the MLB at Field of Dreams Game

The Reds will play as the "home team" during the game, succeeding last year’s home team, the Chicago White Sox — an honor bestowed due to the team’s importance in the classic 1989 sports movie. In the film, Ray (Costner) builds the field after he hears a mysterious voice whisper, "If you build it, he will come."

After Ray creates his cornfield diamond, "Shoeless" Joe Jackson (played in the film by the late Ray Liotta, who died in May at age 67) arrives with other "ghost players" from the infamous 1919 "Black Sox" team, one of several moments of magical realism in the film.

RELATED: Ray Liotta: One of his best performances was also one of his first

Dyersville’s Ghost Players, some of whom were extras in the movie, don’t need magic to appear. "The greatest show on dirt" returns to the Field of Dreams Movie Site on Sept. 3, but you can watch the fun for yourself at home, thanks to Scherrman’s engaging documentary.

Field of Dreams Game: When is it?

The MLB at Field of Dreams game will air on Thursday, Aug. 11 on FOX, and can be seen nationally. FOX's pregame coverage starts at 6 p.m. ET, and the first pitch is scheduled for 7:15 p.m. ET.