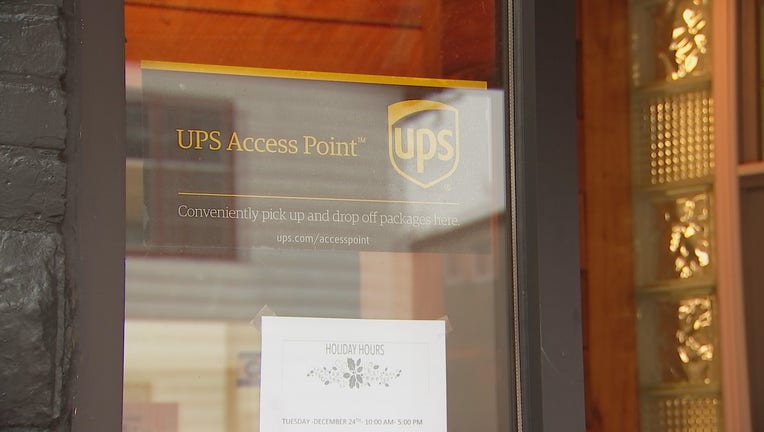 A UPS Access Point in Minneapolis helps customers retrieve packages that weren't claimed on their doorstep.

Some are also struggling to get their packages delivered to loved ones by Christmas.

One Golden Valley woman watched as her package bounced between Minneapolis and Chicago even though it was supposed to be heading to the United Kingdom.

Tamara Hanson, of Golden Valley, says she sent five packages to friends in the United Kingdom at the beginning of December. She was told they would take about a week to arrive. She says one of the packages was delivered but, by using tracking numbers, she’s watched the other four bounce between Chicago and Minneapolis for weeks.

“I’m frustrated because I had to spend a lot of money to ship overseas,” Hanson said.

Hanson says she has called the post office and has been directed to several people there. She says the most recent number she was given rings and rings until she gets a message saying her call cannot be completed.

“I’m just kind of at a loss I don’t know what to do at this point,” Hanson said.

It’s not just customers feeling the frustration. Maciek Sikora, owner of Sikora Polish Market in Minneapolis, made his store a UPS Access Point about four years ago.

“If you live around here and you’re not home when the package arrives UPS will bring the package here and you can pick it up within seven days from us free of charge,” Sikora said.

He says during the holidays as many as 30 people a day come to his store to pick up their packages. He says one benefit of the service is getting new customers into his store. A disadvantage, he says, is when customers become frustrated with him over the timing of their package delivery.

“We have to deal with people who are not happy with packages being either late or being here but most people are very appreciative that they’re not sitting at the door in the snow,” Sikora said.

He says he’s preparing for a busy package return season. Delivery services are too.