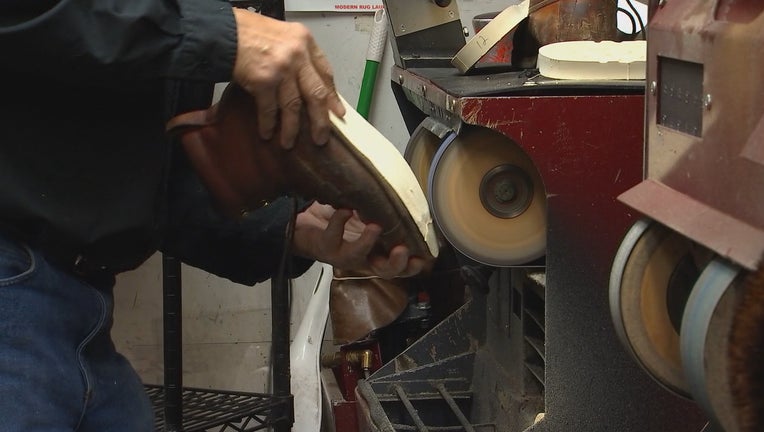 George's Shoes & Repair has a long history and fighting to make it through the COVID-19 pandemic.

ARDEN HILLS, Minn. (FOX 9) - For more than a century, the George family's business has helped give old shoes a new shine.

"Anything that comes through the door, we'll try to find a way to fix things," said Luke George of George’s Shoes and Repair.

The business'&nbsp;biggest challenge, however, will be much harder to mend than resoling a pair of worn out boots.

The business' biggest challenge, however, will be much harder to mend than resoling a pair of worn out boots.

"In the beginning, it was pretty nerve wracking,” said Luke. “We were scared about what was going to happen. Not sure how we were going to survive."

Joe George started the shoe repair shop in Lebanon back in 1905 before moving to North and South Dakota, where his son Said took over after he retired. Over the years, the family-run business survived the Spanish Flu epidemic in 1918 and the Great Depression, but not without a few setbacks.

"The Depression pretty much wiped out my grandfather,” said Ron George, the current owner of the store. “I remember my dad and the aunts telling me that story. He came to St. Paul then and restarted here. That's how they got through that one."

After Minnesota Governor Tim Walz issued his stay-at-home order, Ron and his son and daughter had to lay off nearly a dozen workers. The shop in Arden Hills is only open for a few hours three days a week.

Customers also have to pass their shoes and boots through a Plexiglas barrier at the door or they can leave them in a drop box or mail them in, so all interactions are no contact.

"We're fighting through it,” said Ron. “The three days a week that we're open, for me I call it CPR. I'm performing CPR three times a week. Just to keep it afloat because if we just locked it for a month or two, it's a lot harder to bring back to life."

After everything their family has been through over the last 115 years, the Georges aren't ready to give their shoe repair business the boot just yet.

"We come out on the other end stronger than before," said Luke.