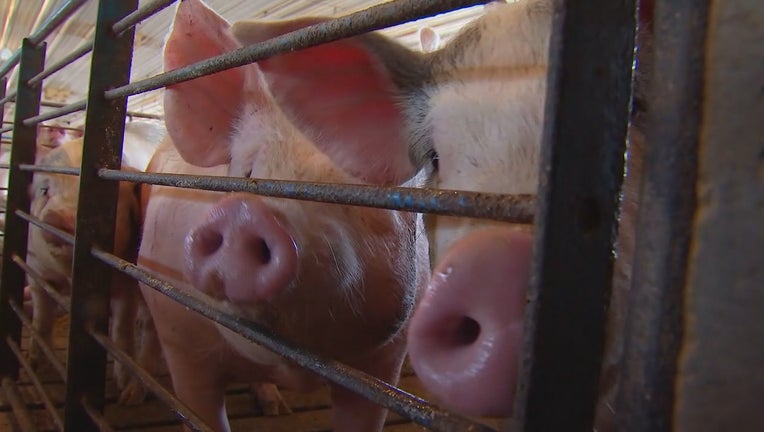 Pork producers are facing having to euthanize their hogs as meat processing plants close due to COVID-19. (FOX 9)

(FOX 9) - President Donald Trump used the Defense Production Act for an executive order to keep meat processing plants across the country open. It’s an effort to prevent looming shortages of pork, chicken and other products, but thousands of meatpacking workers have already been infected with COVID-19.

Meat processing plants like JBS in Worthington, Minnesota will likely be forced to open back up under the Defense Production Act. It’s expected that the CDC will implement a standardized approach rather than each state or county setting their own guidelines. It’s a move Minnesota pork producers were pushing for.

“At this point we’re open to any small win that we can get,” said Dave Preisler of Minnesota Pork. “I think this does look to be a positive move to try to move this forward, but we still have literally a couple million pigs that are backed up in the system. And so we’re still going to have to work through that over the next several weeks and months.”

Those in the pork industry were looking at hundreds of thousands of pigs being euthanized, since there was nowhere to take them. It’s not clear how much the president’s order will change that.

“There’s been such a deep, deep hole that’s been dug financially that farmers are in that’s it’s going to take additional financial resources from the federal government for many farms to even look at surviving this,” said Preisler.

Preisler says he understands there’s a balance between helping farmers and the food supply and keeping plant workers and the community healthy. It’s something that has Minnesota health experts deeply concerned.

“It seems counterintuitive on the level of just what’s happening with the outbreak, but understanding that these are very important industries, and everyone wants to see them operating as soon and as safely as they can,” said Minnesota Department of Health Commissioner Jan Malcolm.

Congressman Collin Peterson, the chairman of the House Committee on Agriculture, has been closely monitoring the situation. Officials told FOX 9 JBS will still open up Wednesday to euthanize about 13,000 pigs.