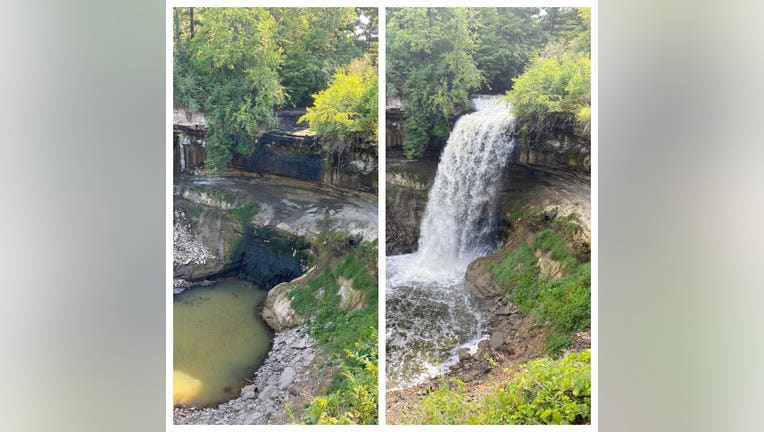 Minnehaha Falls Monday versus Tuesday after the recent rainfall

MINNEAPOLIS (FOX 9) - Update: Minnehaha Falls is flowing once again after the rainfall overnight.

Minnehaha Falls is easily one of the most photographed spots in the state. But this year, because of the drought, it's a very underwhelming sight that many visitors are not used to.

There’s virtually no waterfall at the iconic spot, and it’s something officials say they haven’t seen in a decade.

Minnehaha Falls is dry for the first time in a decade

Due to this year's drought, Minnehaha Falls is dry for the first time in a decade.

Michaelann Gillis has lived in Minneapolis for more than 10 years, and she’s never seen the falls dried up.

"I almost can’t speak to it because it’s really upsetting…Minneapolis is really known for its beautiful parks within a major city, and to see this is sad," Gillis said.

And she’s not alone.

"I’ve never seen this like this…with no water. I’ve seen this with a lot of water," Betsy Carnahan said.

There are seven streams that drain into Lake Minnetonka, and the water that leaves it flows into Minnehaha Creek eventually create the waterfall.

The lack of rain this season is why you’re not seeing the usual flow of water.

"It’s just a simple math equation. We’ve had way more heat and evaporation than we've had rain, so if you look at June and July, we had nearly 13 inches of evaporation," said Tiffany Schaufler with the Minnehaha Creek Watershed District.

While Minnehaha without the falls doesn’t feel right to a lot of us, Shaufler says there’s nothing to worry about just yet.

"Right now the state maker is, ‘how does this compare to the 1988 drought,’ and we’re not quite there yet," she said.

Those who manage Minnehaha Falls say the last time it was dried up like this was in 2012 and then in 2000 before that.