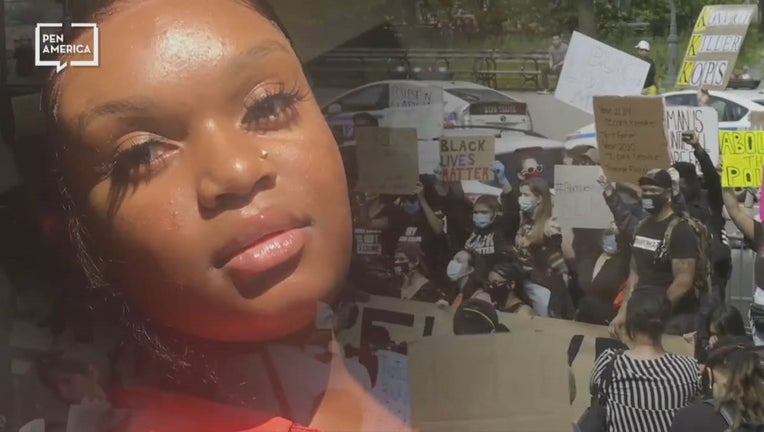 Darnella Frazier received an award from PEN America for taking video of the arrest of George Floyd. (PEN America)

MINNEAPOLIS (FOX 9) - A high school student in Minneapolis has been recognized with a prestigious national courage award for filming the arrest and death of George Floyd.

Barack Obama, Madeleine Albright, Spike Lee were among the famous names who took part in a virtual PEN America gala Tuesday night to honor those protecting freedom of speech and the power of words.

A high school student in Minneapolis&nbsp;has been recognized with a prestigious national courage award for filming the arrest and death of George Floyd.

"A young woman whose cell phone and fearlessness may have changed the world, Darnella Frazier, remember that name," said Franklin Leonard, the host of the gala.

PEN America is a national literary and human rights organization. The work they’re highlighting this year, they say, is more important than ever, including the actions of Frazier.

The teen virtually accepted her PEN Benenson Courage Award, which was presented by film director Spike Lee, for her actions on May 25.

"My sister, I commend you and you deserve this award," said Lee.

The 17-year-old took out her cell phone on the corner of 38th and Chicago and filmed former Minneapolis Police officer Derek Chauvin kneeling on the neck of George Floyd for nearly nine minutes. Chauvin is now facing murder charges.

"It’s just a lot to take in, but I couldn’t say thank you enough for everything that’s been coming towards me," said Frazier.

The teen’s video sparked worldwide protests and a path for change.

"Thank you Darnella," said Anita Hill. "Your thinking and bravery under immense pressure has made the world safer and more, just thank you."

The young woman said she is still taking in what it means to be one person who can make a big difference.

"I never would’ve imagined out of my whole 17 years of living that this would be me," said Frazier.