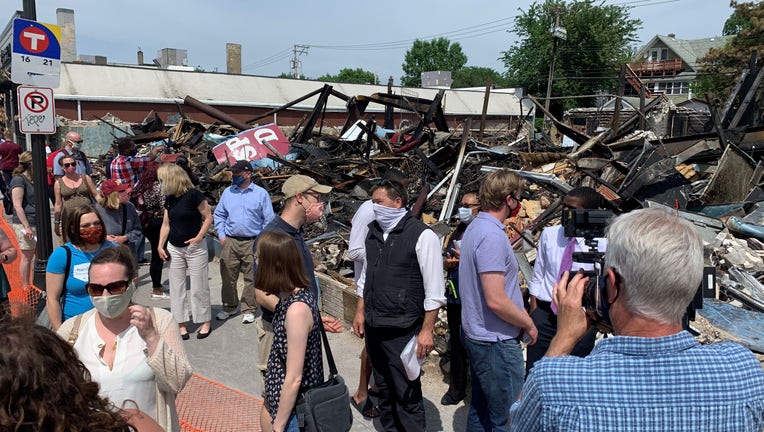 Lawmakers view damage in St. Paul from the riots that followed the death of George Floyd. (FOX 9)

ST. PAUL, Minn. (FOX 9) - Minneapolis and St. Paul officials are turning to the state for financial help after unrest in their cities following the death of George Floyd damaged hundreds of buildings.

Minnesota lawmakers saw the damage firsthand Thursday during three separate tours of the hardest-hit areas on Lake Street in Minneapolis and University Avenue in St. Paul. They walked past broken windows, boarded up stores, and burned down buildings.

Minneapolis and St. Paul officials are turning to the state for financial help after unrest in their cities following the death of George Floyd damaged hundreds of buildings

"We definitely need all the help we can get from the state," St. Paul Mayor Melvin Carter said in an interview during the tour. "We haven’t quantified [the damage] yet. I’m hopeful we’ll have specific numbers very soon. But one thing that’s clear at the beginning is, it’s going to be staggering."

A special session is likely to start June 12 and appears certain to last weeks or months given the issues in play, including policing overhauls, help for rebuilding communities, and the coronavirus response.

Some legislative Democrats have called on lawmakers to use a bonding bill to free up cash for Minneapolis and St. Paul's rebuilding efforts. Bonding money cannot flow straight into the hands of private businesses, though a bonding bill could be used to rebuild city-owned buildings or add new community spaces.

The special session's likely start date -- June 12 -- is predicated on Gov. Tim Walz extending his peacetime emergency over the coronavirus. It will likely start too soon for a final plan on how to respond to the unrest, said state Sen. Dave Senjem, who leads the Senate Capital Investment committee.

"We're going to stick around until the work is done," said Senjem, R-Rochester, in a telephone interview. Senjem raised the possibility of two bonding bills: first, a larger one that lawmakers failed to pass during the regular session, and then a second one once Minneapolis and St. Paul fully understand their needs.

“The city leaders are working for the moment (on cleanup), not for the future. I can understand that completely," Senjem said.

University Avenue between Snelling and Lexington avenues is the "epicenter" of St. Paul's damage, but it stretches to the state Capitol and into Lowertown, Department of Safety and Inspections Director Ricardo Cervantes said.

In St. Paul, the unrest damaged 117 buildings, not including those that were simply looted. The number will increase as inspectors continue to access boarded-up buildings, city officials said.

"It’s pretty devastating," Rosenberg said. "I had seen pictures, but to see it in person is a whole other story."

In Minneapolis, the damage is also widespread. Some north side businesses were heavily damaged, though many of the destroyed businesses are on Lake Street on the city's south side.

The two cities' priorities have frequently clashed with Republicans who control the state Senate. But lawmakers on both sides of the aisle, including House GOP Leader Kurt Daudt, saw the damage in Minneapolis and St. Paul firsthand Thursday.

"We are literally calling 911," Carter told them. "We literally are calling for CPR right now in our community, as we face a level of destruction that is unprecedented."