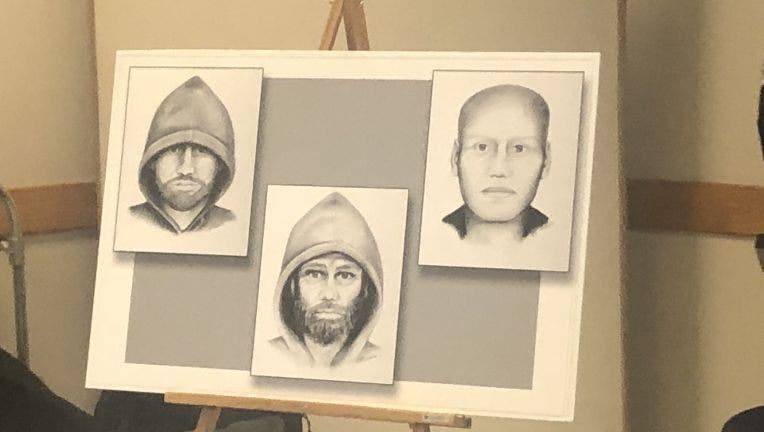 Minneapolis Police released these sketches of a man they believe to be responsible for a number of attempted abductions, including two recent ones.

MINNEAPOLIS (FOX 9) - The Minneapolis Police Department says it has arrested an Anoka County man in connection with a series of sexual assaults in the Marcy-Holmes and Dinkytown neighborhoods and elsewhere in the Twin Cities dating back to 2013.

Sunday afternoon, Mayor Jacob Frey thanked the department for the arrest he said was the "culmination of an extraordinary amount of work and perseverance dating back to at least 2013."

Minneapolis Police arrest Anoka Co. man in connection with series of sexual assaults dating back to 2013

The Minneapolis Police Department says it&nbsp;has&nbsp;arrested an Anoka County man in connection with a series of sexual assaults in the Marcy-Holmes and Dinkytown neighborhoods and elsewhere in the Twin Cities dating back to 2013.&nbsp;

MPD Chief Medaria Arradondo said the man was taken into custody Friday morning at an Anoka County residence and interviewed by the MPD.

Last month, Minneapolis Police released sketches of the man and offered a reward in the hopes of identifying him. The department's Violent Crimes Apprehension Team took the man into custody.

Police believe the same man is responsible for two attempted abductions near the University of Minnesota in late February and early March.

Minneapolis Police responded to incidents like this as early as February 2015, but police say he may be connected to other sexual assaults as early as 2013 in other jurisdictions. In 2019, Marcy-Homes neighborhood residents attended a meeting after reports of similar activity to hear from law enforcement.

In late February 2020, Minneapolis Police linked the incidents together. In early March, police responded to yet another attempted abduction.

Lt. Darcy Horn, the head of MPD's Sex Crimes Unit, applauded the department for conducting the investigation with its victims on the forefront. She said they treated each case as an individual instead of "numbers on a list."

"We recognize, above all, the victims and survivors," Horn said. "Their strength and their courage. We thank them for their patience and the faith they put in us."

Each speaker applauded the courage of the victims in these numerous cases. Frey hoped the charges would help bring "closure" for the victims.

"We want to extend our sympathy to the victims of these seuxal assaults and to let them know that these incidents weighed heavily on us as an agency," Fors added.