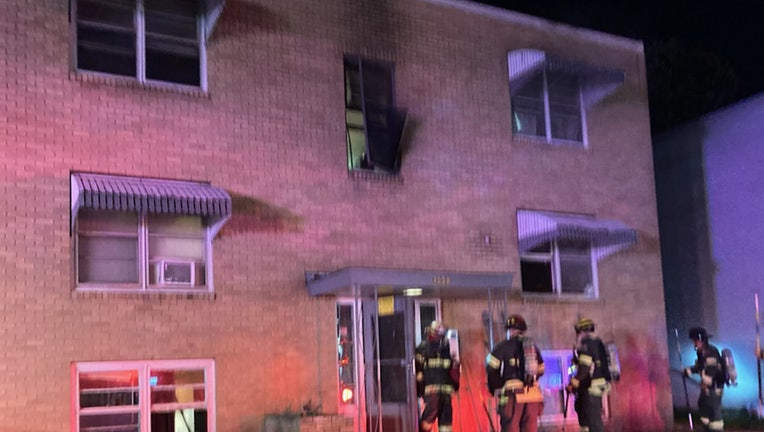 Minneapolis firefighters rescued an adult and a child from a fire at a three-story apartment building at 3550 Penn Ave N. early Wednesday morning. (Photo courtesy of the Minneapolis Fire Department)

MINNEAPOLIS (FOX 9) - When firefighters rushed to a fire at a three-story apartment building in Minneapolis's Camden neighborhood about 25 minutes after midnight on Wednesday, they reason to move with a particular sense of urgency: 911 dispatchers had told them that there might be a child trapped on the third floor.

Then, when Minneapolis firefighters arrived at the building at 3550 Penn Ave N., they saw thick black smoke coming from the third-floor windows.

"It does put more emphasis on the search and getting to that third floor to more aggressively search that area, to get to that child immediately," Minneapolis Fire Department Public Information Officer Melanie Rucker told FOX 9. "At the same time, you still have to actively fight the fire while you're doing the search because that will minimize the danger."

Firefighters quickly deployed their hoses and extinguished a fire in the laundry room on the first floor/garden level, according to an MFD press release. When they reached the third-floor apartment where the child was present with an adult, they knocked on the door to alert them — the child and the adult may have been asleep or otherwise unaware of the fire, Rucker said, and then evacuated both of them from the building.

Paramedics checked the child and the adult for possible smoke inhalation and also evaluated another resident for heart-related issues. All three were medically cleared and did not need to be taken to the hospital, according to the release.

Firefighters deemed the apartment building uninhabitable due to the fire, heavy smoke and water damage. The Red Cross was called to the scene to assist 20 residents, including children, and authorities called in a Metro Transit to provide the families with a temporary shelter.

Rucker said the crews acted professionally and quickly to get the child and the adult to safety before anyone was injured.

"I really commended our crew for making sure that they did their due diligence to get that child out and their parents as well," she said.