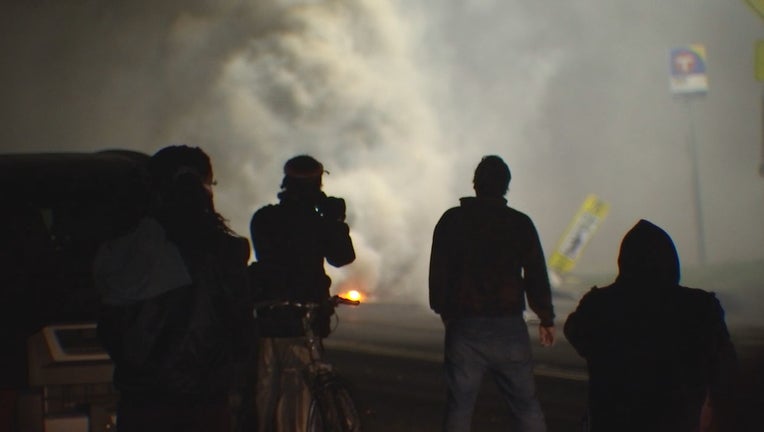 MINNEAPOLIS (FOX 9) - The Minneapolis City Council has voted 11-1 to oppose the use of tear gas and other munitions as part of Minnesota's response to civil disorder.

Some 3,000 National Guard soldiers have been deployed in response to Brooklyn Center unrest and the end of the Derek Chauvin murder trial next week. In Brooklyn Center, police used gas and nonlethal munitions as people tried to overrun the city's police station this week.

Law enforcement spray protesters outside the Brooklyn Center Police Department during fourth night of protests over the fatal police shooting of Daunte Wright.

"We're just going to pump people full of fear and say, 'Trust us, we got it. It doesn't matter how many chemical irritants we use, and it also doesn't matter whether or not it works,'" Ellison said.

The Minneapolis resolution has no real effect. Mayor Jacob Frey -- not the council - has operational control of Minneapolis Police, which is a member of the multi-agency respond known as Operation Safety Net.

Council President Lisa Bender described the vote as "a statement of the values of the City Council."

Council Member Linea Palmisano was the lone no vote.

"Doing this now, making these statements to oppose everything now, as everyone is trained on the protocol that exists and how it all coordinates, I fear that would be a failure of leadership," Palmisano said.