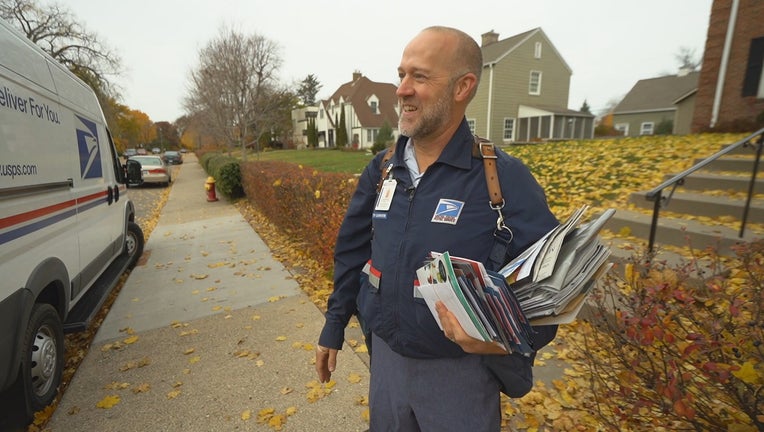 The USPS has listed its rankings of 2021 dog bite attacks on its carriers, and is promoting a 'Bite Awareness" week in the process.  (FOX 9)

MINNEAPOLIS (FOX 9) - In an effort to protect its carrier employee workforce that is already experiencing a shortage, the United States Postal Service (USPS) is promoting an awareness campaign to tame canine attacks.

A long-held foe of the mail carrier, dogs attacked more than 5,400 postal employees in 2021, according to a news release from the USPS.

Of its nationwide rankings for cities with the most reported attacks, Minneapolis ranked No. 19, with a reported 22 attacks. Cleaveland ranked No. 1 with 58 attacks, Houston was No. 2 with 54 and Kansas City was third with 48. By state, California ranked the highest with 656 total attacks, followed by Texas with 368 and Ohio with 359.

"Every year, thousands of postal employees are attacked by dogs as they deliver America’s mail. And while it’s a dog’s natural instinct to protect their family and home, we ask all customers to act responsibly by taking safety precautions with their dogs while the mail is being delivered," USPS Employee Safety and Health Awareness Manager Leeann Theriault said in a news release. "When a carrier comes to the residence, keep the dog inside the house and away from the door – or behind a fence on a leash – to avoid an attack."

The USPS warns that even friendly dogs will bite depending on circumstances given that dogs are primarily territorial in nature and protective of their owners and their owners’ property. As a result, the postal service announced an annual National Dog Bite Awareness Week public service campaign that runs June 5 through June 11.

If a dog attacks, carriers are trained to, "Stand their ground and protect their body by placing something between them and the dog – such as their mail satchel – and use dog repellent, if necessary," according to the USPS.