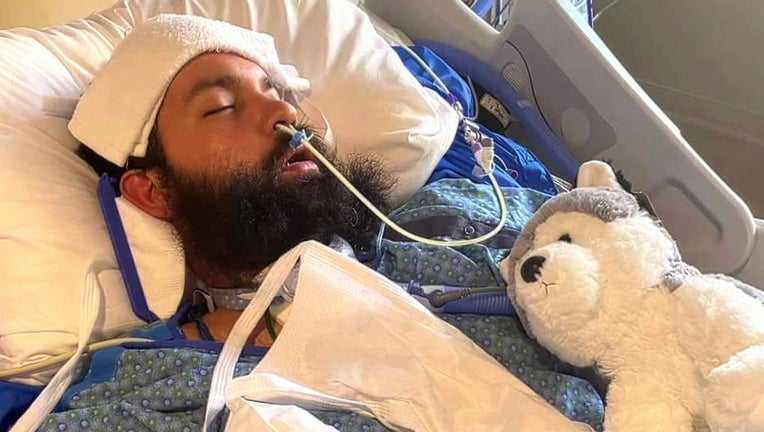 MINNEAPOLIS (FOX 9) - A Wisconsin man is sharing his recovery story after he miraculously survived being shot 15 times in Minneapolis last year.

Almost a year after being shot 15 times in Minneapolis, Gabe Tauscher continues to defy the odds. The now-30-year-old spent 85 days in the hospital, and to this day, 3 of the 15 bullets remain in his body.

Man survives after being shot 15 times in Minneapolis

A Wisconsin man is sharing his story after he miraculously survived being shot 15 times in Minneapolis last year.

"The more I talk about it, the easier it is to deal with and to work through," Tauscher told FOX 9 on Tuesday. But it isn’t easy to put into words the suffering his body went through.

"Every nerve that had been cut was screaming," Tauscher said. "The last few shots I got actually felt more like burns than anything."

The shooting happened on May 29, 2021, at apartments on 9th Street and LaSalle Avenue in Minneapolis.

"Three [bullets] to the left hip, one got me in the back of the left foot, one in each butt cheek," Tauscher explained. "I’ve got four-ish in my left arm."

Tauscher was surprised he’s even alive, "I know there’s a lot of luck, a little bit of skill, and maybe some divine intervention," he said.

In his fight to live, Tauscher says he needed 20 pints of blood or about twice the amount in the average person.

"I feel like I’m a little bit more thankful for life in general," Tauscher said.

What followed that was a long uphill battle to get back on his feet. The bullets left his body covered in holes, but without any brain or spinal injuries; he’s grateful for that in his second chance at life.

Tauscher says he doesn’t hold any resentment towards the man who shot him in an exchange of gunfire – a man who he says was an ex-boyfriend of the girl Tauscher was dating at the time. The suspect died after a police chase through Sherburne County -- during which he was reportedly shooting a gun at officers – and ultimately turned the gun on himself.

"I forgive him," Tauscher finished.