First responders are on the scene of a large fire in Mound, Minnesota Saturday evening.

MOUND, Minn. (FOX 9) - A man is being credited as a hero Saturday night after firefighters say he helped rescue a burn victim from a fire in Mound, Minnesota.

Fire crews were called to the blaze on the 4400 block of Wilshire Boulevard at 5:06 p.m.

Initial calls reported a fire on the second and third floors of the building. The first crews at the scene found smoke and fire at the building.

Additional crews were called in to help, with eventually four alarms being called for the fire.

As residents escaped the flames, John Ellingsworth heard calls coming from the building and ran back to help. 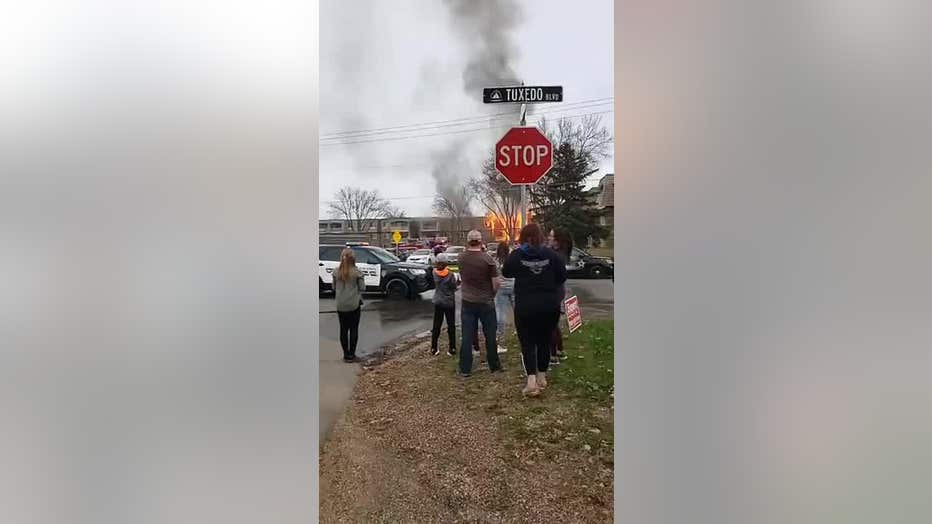 "I just ran outside, found out where [the calls] were coming from," explained Ellingsworth. "I ran to his floor. He was standing in the doorway, shut the door. I kicked it open. I told him he needed to come with me. He proceeded to try and fight the fire, try to put it out...I just grabbed his legs and pulled him out, down the flight of stairs and out the door."

Firefighters say two people were hurt in the fire. One person on the third floor who suffered burns and another on the second who suffered slight burns and smoke inhalation.

The cause of the fire is under investigation. No firefighters were hurt battling the blaze. The Red Cross is working to assist residents who will need help after the fire.