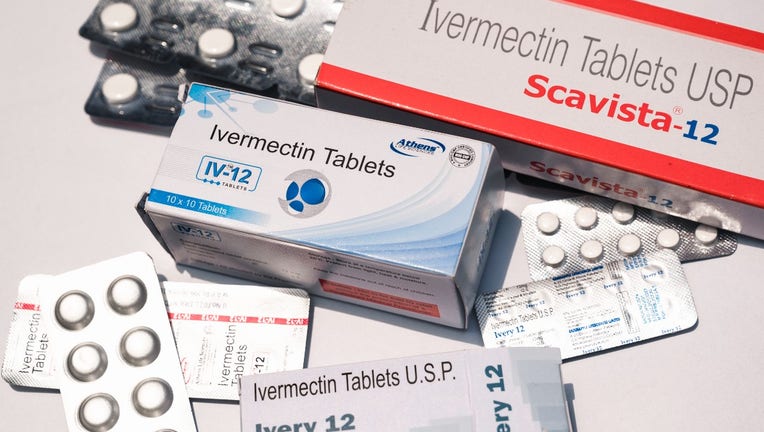 This picture shows the tablets of Ivermectin drugs in Tehatta, West Benga, India on 19 May on 2021. Some Indian state governments have plans to dose their populations with the anti-parasitic drug ivermectin to protect against severe COVID-19 infectio ((Photo by Soumyabrata Roy/NurPhoto via Getty Images) / Getty Images)

(FOX 9) - The Minnesota Poison Control System saw an uptick in August for exposure calls for ivermectin, a drug falsely claimed to treat COVID-19.

Ivermectin is a de-wormer drug used for pets and livestock. In this form, the drug can be highly concentrated and could be toxic if taken by humans, according to the Centers for Disease Control and Prevention. While there is a human version of the drug, it is not an anti-viral drug nor does it have FDA approval or authorization to treat COVID-19. A recent National Institutes of Health clinical trial also found insufficient data to recommend ivermectin as a COVID-19 treatment.

However, misinformation has led some turning to the drug amid the rise of the delta variant. The CDC issued a health advisory this week after increases in hospitalizations for people using ivermectin intended for horses and a study found a 24-fold increase in ivermectin prescriptions from pharmacies compared to pre-pandemic.

High doses of ivermectin can lead to an overdose. Symptoms include nausea, vomiting, diarrhea and can lead to decreased consciousness, hallucinations, seizures, coma, and death. The drug could also impact the effect of other medications.

The CDC recommends people should get the COVID-19 vaccine as it is the "safest and most effective way to prevent getting sick and protect against severe disease and death" from the virus and the delta variant. Regardless of vaccination status, the CDC also recommends wearing masks indoors.