INVER GROVE HEIGHTS, Minn. (FOX 9) - James may have his Giant Peach and Jeremy Millinczek may not be Charlie Brown, but he seems to have a green thumb for growing gigantic gourds.

"This is my great pumpkin," said Millinczek of Inver Grove Heights. "I'm thrilled. The biggest pumpkin I've personally grown is 386 pounds. This one beating all my expectations for the year."

Millinczek started growing pumped up pumpkins in the garden in his backyard during the pandemic a couple of years ago.

So far, the cream of his current crop weighs a whopping 775 pounds, and half his garden, 900 square feet of vines, is devoted to helping it blossom.

"It's so fun to watch them grow. At the peak of the season, they are growing 25 pounds a day. These last 30 days watching it explode, it's magical. It's like Jack and the Beanstalk," said Millinczek. 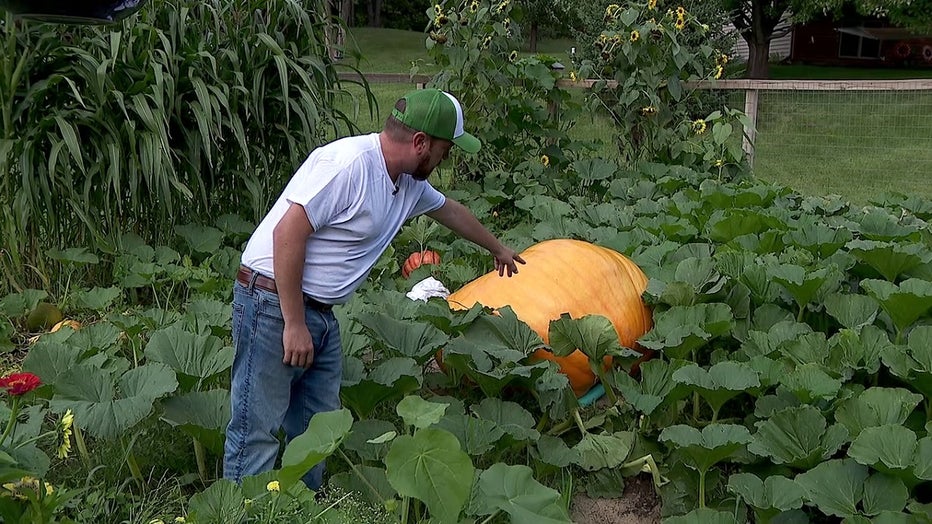 One Inver Grove Heights man has a green thumb for growing gigantic gourds, with one current crop that weighs a whopping 775 pounds.

It sprouted from the seeds of a descendant of the "Tiger King" pumpkin, which was grown in Anoka,  and was declared the heaviest pumpkin in North America at 2350 pounds a couple of years ago.

"It's all about genetics. You gotta start with seeds from a giant pumpkin. All giant pumpkins are Dills Atlantic giant pumpkins, that's the variety. Through selective breeding each year, growers break the record every year. Every year, the record gets broken," said Millinczek.

Like he has for the last two years, Millinczek plans to donate his giant pumpkin to the city of Inver Grove Heights, so it can be put on display at the Veterans Memorial Community Center.

And maybe plant the seed for others to follow in his footsteps in the future.

"I just love doing it. I love the reaction it gets from people. It's just been a positive experience all around," said Millinczek.