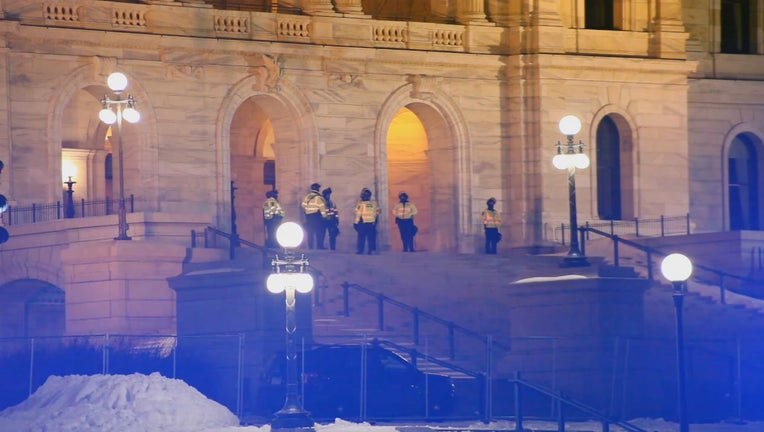 Extra patrols have been spotted around the Minnesota State Capitol after the DC riots. (FOX 9)

ST. PAUL, Minn. (FOX 9) - Minnesota leaders say increased security will continue at and around the Minnesota State Capitol as supporters of President Trump have planned a rally for Saturday, days after the U.S. Capitol was stormed this week.

Friday night, for a third straight day, we saw extra barricades and extra law enforcement near the capitol. It's all part of a multi-agency effort to make sure what happened in Washington, D.C. doesn't happen in St. Paul.

Minnesota leaders say increased security will continue at and around the Minnesota State Capitol as supporters of President Trump have planned a rally for Saturday, days after the U.S. Capitol was stormed this week.

"I feel we are in a good place, guardedly knowing that on any given day, any given plan can be overcome," said Minnesota Department of Public Safety Commissioner John Harrington. "But given what we know right now, I feel we are in a very secure posture."

Commissioner Harrington tells FOX 9 that since Wednesday, state patrol staffing and capitol security have increased and DNR conservation officers, the St. Paul Police Department along with the Ramsey County Sheriff's Office are ready to assist if needed.

"This is a dynamic operation where we recognize as tactics change, as numbers change, as intent change we have to change with it," Harrington explained.

The FBI Field Office in Minneapolis adds that while you may not see them on the streets, they’re aware of what’s happening locally too.

"In addition to reacting to things that are purely coming from DC, we’re watching here carefully because there will be no tolerance for further violence here and we will follow up immediately to preempt that," said Special Agent in Charge Michael Paul.

In a letter released Friday, Commissioner Harrington informed state lawmakers that law enforcement is aware of protests targeting elected officials -- some even showing up outside their homes, carrying guns.

It's believed protestors may soon target the homes of local judges and state legislators too. The commissioner adds while there are "few known active threats to the state capitol," they are working hard to prevent any chaos. They are also reminding elected leaders their words matter and not to stand by silently if violence takes hold and laws are broken.

Saturday afternoon, a pro-Trump group called "Hold the Line Minnesota" has planned a rally on the capitol grounds. The group showed up on Wednesday as well, but things remained peaceful. The group has indicated they may go to some homes after the rally, but it's not clear where or whose houses they'd protest at.