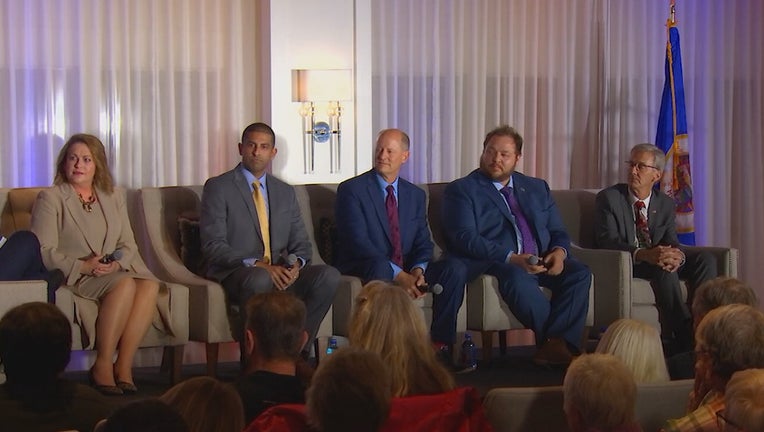 WAYZATA, Minn. (FOX 9) - All five Republican candidates for Minnesota governor who appeared at a forum here this week said they've had COVID-19, and two said they would not get vaccinated against the virus.

The Republican primary is playing out in contrast to Gov. Tim Walz, who has staked his re-election bid to his handling of the pandemic, which has been the subject of numerous lawsuits and criticism from Republicans and some business groups.

In the Minnesota Governor's race, five Republican candidates say they've all had COVID-19. Their plans to address the ongoing pandemic are quite different from current Gov. Tim Walz.

GOP challengers Scott Jensen and Mike Murphy said they had natural immunity and didn't need to be vaccinated. The other three candidates -- state Sens. Michelle Benson and Paul Gazelka and dermatologist Neil Shah -- said they had gotten vaccinated.

Jensen, a family physician, said he was not telling his patients what to do.

"I’ve not been vaccinated. I don’t intend to. And I encourage my patients to make a good decision and talk with their families about it," Jensen said.

Murphy, the mayor of Lexington, said he had a "terrible" experience with COVID-19 when an infection took away his senses of smell and taste for three weeks. But he said the vaccination process is a "transformation of our wealth to big pharma."

"Natural immunity is where it's at," he said.

Shah said he had a breakthrough case after getting the Johnson & Johnson vaccine and had taken Ivermectin, a drug that the U.S. Food and Drug Administration has not approved to treat the virus.

All five candidates have made opposition to vaccination mandates a central part of their platforms. Numerous Minnesota employers are requiring their workers to get shots -- a mandate that courts have affirmed -- though Walz says state law prohibits him from imposing a statewide requirement. His vaccine rule for state government employees who work on-site allows workers to avoid it by testing weekly.

Gazelka said he and his wife got their shots after being infected by the virus.

"I would never, ever force somebody to be vaccinated," said Gazelka, of East Gull Lake.

Benson said she has tested her antibody levels, which she said are high enough that she hasn't gotten a booster dose.

"I don’t think it’s the job of the press and politicians to tell you how to make these decisions," said Benson, of Ham Lake.

During a visit to a vaccination site at Century College in White Bear Lake on Thursday, Walz said again promoted the shots. Minnesota is in the throes of a delta-fueled surge in cases, with 1,653 people hospitalized with the virus as of Thursday, a new high for 2021.