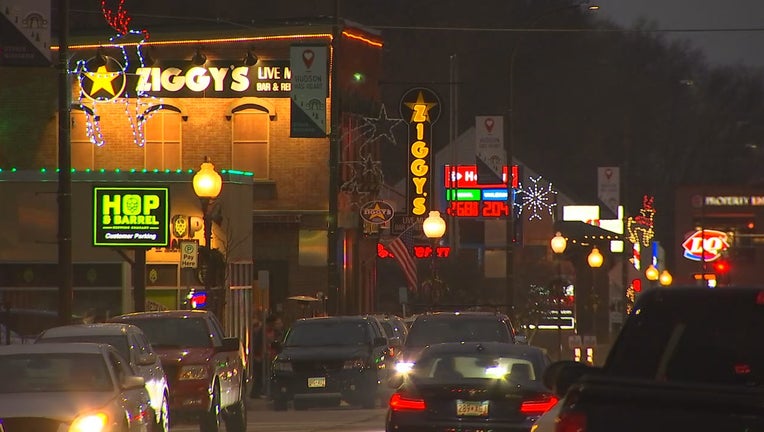 A curfew could be going into place this week after a deadly stabbing over the weekend. (FOX 9)

HUDSON, Wis. (FOX 9) - The Hudson City Council voted unanimously to put a 10 p.m. curfew in effect at restaurants and bars on Thursdays, Fridays and Saturdays following a sharp increase in foot traffic at Hudson establishments amid the current COVID-19 dining restrictions in Minnesota.

Tuesday night, the Hudson City Council held a special meeting on the emergency order. The 10 p.m. curfew impacts restaurants, bars and other establishments with on-site liquor consumption on Thursdays, Fridays and Saturdays. The curfew would also be in effect on Dec. 23. Private parties can also apply for an exception to the order.

Following an uptick in crowds due to the COVID-19 restrictions in Minnesota, the Hudson City Council passed an ordinance to set a curfew at restaurants and bars on Thursdays, Fridays and Saturdays.

The order goes into effect Dec. 11 and last until Jan. 3.

"They’re coming here in droves, in inordinate numbers, because we are open and Minnesota is not. Period," said O'Connor.

At the meeting, the Hudson police chief said since the Minnesota shutdown there’s been a drastic increase in people coming to Hudson from around 10 p.m. to 2 a.m. bar close to drink.

Willem said there’s not only an uptick in the volume of calls, but also an increase in the resources needed to respond to many of those calls, like assault, robbery and weapons violations.

"It’s not necessarily just the call volume," said Willem. "It’s the type of calls that are so ramped up and taking so much more time and resources to investigate that everything else is just kind of left alone."

Public comment was not allowed at the meeting because the council wanted to complete the discussion before another scheduled city meeting. Residents were able to voice their opinions to council members through emails and public comment during Monday night's meeting.

Council members will discuss a possible extension to the order at their next meeting on Jan. 4.