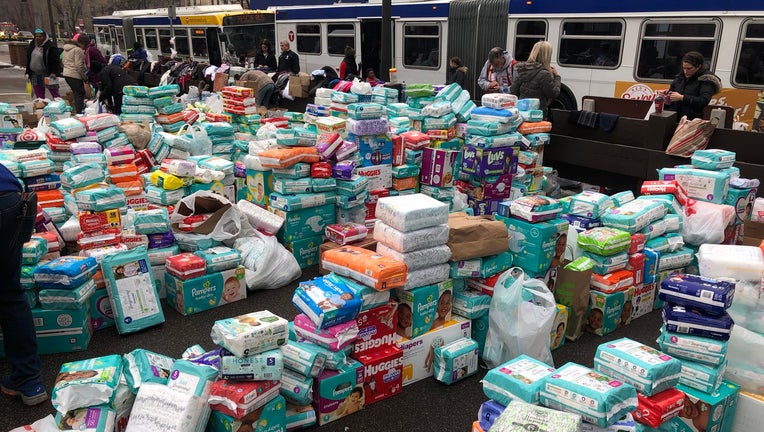 MINNEAPOLIS (FOX 9) - In an overwhelming show of holiday spirit, hundreds of Minnesotans showed up on Christmas morning to make donations for displaced families after a fire ripped through the Francis Drake Hotel in Minneapolis.

Now, officials say they are overloaded with goods and are asking people to make financial donations instead.

The fire broke out around 3 a.m. and burned throughout the day, leaving a spot that many families call home destroyed. The Drake Hotel is an overflow shelter for families experiencing homelessness in Hennepin County. As a result of the fire, 240 people, including 100 children, have lost a place to stay.

The dramatic circumstances of the fire coming on Christmas Day had many people wondering what they can do to help. While plenty of generous folks brought items to donate directly to the scene, like clothes and diapers among other goods, city officials and the Red Cross are asking people to donate in other ways.

"We know that people are generous and want to do everything they can to help after a disaster," a Red Cross representative wrote in a message. "However, it takes time and money to store, sort, clean and distribute donated items."

Crews are working to collect and store the items until they can be distributed to the families. A Minneapolis spokesperson said the city has found a spot to secure the items overnight and will work on determining the best way to distribute the donations starting Thursday.

But, again, officials are asking people to stop bringing items to the scene. Instead, the City of Minneapolis has also set up a fund to collect money for the Drake families. You can click here to donate to that.

The Red Cross also says the best way you can help is to make a financial donation. You can do that by visiting the Red Cross website. You can also call 612-872-3226 or 1-800-RED-CROSS. You can also text REDCROSS to 90999. Donations can also be mailed to the American Red Cross Minnesota Region at 1201 West River Parkway, Minneapolis, MN 55454.