The Bliss family in New Hampshire has shared many good times with their dog, Ruger, who was given a terminal cancer diagnosis.

HUDSON, N.H. - A dog becomes part of the family, woven into memories made over the years. Between happy milestones and comforting us during hard times, they’re always there.

The Bliss family in New Hampshire has shared many good times with their dog Ruger, who is now facing a terminal cancer diagnosis, and they decided to recreate a years-old photo with their beloved pet.

Dylan Bliss posed with Ruger as a puppy on his first day of first grade. Bliss recently graduated from Alvirne High School in Hudson, located about 35 miles south of Concord, and took the same picture with their now 11-year-old dog on graduation day. 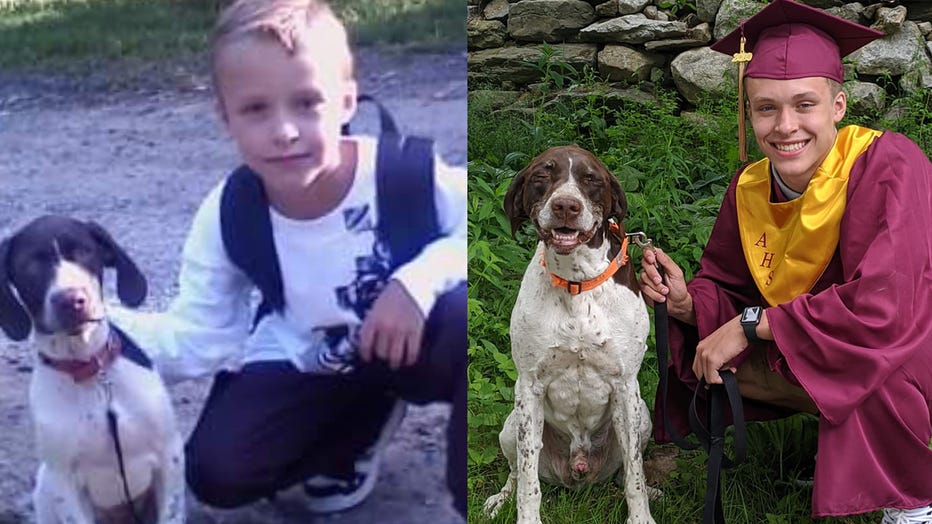 Dylan Bliss and Ruger are pictured on the first day of first grade, alongside an image of the pair on Bliss’ high school graduation day. (Photo credit: Corie Bliss)

“Congratulations to our son and all the 2020 graduates,” Dylan’s mom, Corie Bliss, wrote on Facebook. “Our beloved dog Ruger is terminal and battling cancer, we were so thankful to still have him here with us for our son's graduation last night. 1st day 1st grade vs. graduation night 12th grade #mansbestfriend."

Between first days of school and family trips, Ruger has been a part of it all.

“He was always there with us,” Dylan Bliss told local station WMUR-TV. “No matter if it was vacations or coming home from school, leaving school. He was always there on the couch or hiking with us. So, it’s like he’s kind of in all my memories.”

Corie Bliss echoed the sentiment, saying she has thousands of treasured photos “throughout the years of our beautiful boy.”

“We have a small farm and he loves all of his critters on it. He loves to run around, go in and out of the pool all day,” She said. “He has a very nice life.”

Corie Bliss added that the family takes camping trips every year with Ruger in tow. They plan to take another trip this summer, which will most likely be Ruger’s last as he is declining in heath.

“We've had Ruger since he was weaned from his momma. He is every bit of our lives,” she said.