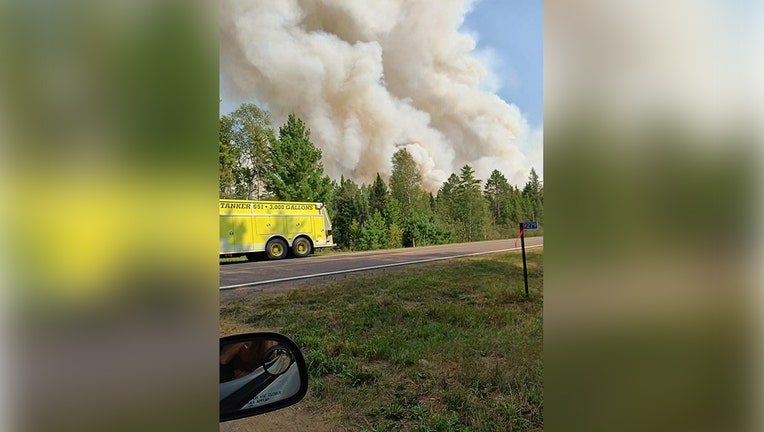 The Greenwood Fire is burning near Greenwood Lake in the Superior National Forest, prompting evacuations for those who live or have cabins in the area.  (FOX 9)

The fire has now grown to 4,750 acres, which is close to 7.5 square miles. Forest Service officials are worried about enhanced weather conditions feeding flames in the rugged, hard-to-access forest. The forecast shows potential for thunderstorms Friday night and Saturday, which they will closely monitor.

Specialized fire crews from South Dakota made their way to northern Minnesota on Thursday to join the fight against burning and quickly-spreading wildfires in the Superior National Forest.

"We might get some wetting rains, but it’s nothing to help with this fire, put out this fire at all," Larry Bickel, a spokesperson said. "We’re just going to watch the wind change. That’s the key with us."

Aircraft, heavy equipment and structure protection crews increased their fire suppression efforts on Thursday to hold the fire east of the highway, according to officials at incident command.

Firefighting efforts continue for the Greenwood Fire in the Superior National Forest in Minnesota's Arrowhead region. Planes dive down into Sand Lake to collect water and drop it on the flames. At last check, the wildfire had grown to 2,000 acres.

Additional resources arrived on Thursday to fight the fire on the front lines, including the Tatanka Hotshots—a 20-person Forest Service crew from the Black Hills National Forest in South Dakota.

"We use hand tools, dig lines, chainsaws. We cut line, do back burn operations. If the fuel is burned, it can’t travel any further," said William Briggs, a member of the Tatanka Hotshots.

A public meeting will be held Thursday at 6 p.m. at the Wolf Ridge Environmental Learning Center auditorium in Finland. Officials are expected to discuss the forest closure, evacuations and provide an update on fire suppression efforts. The meeting will be streamed live on the Superior National Forest Facebook page.

The fire is threatening homes, cabins, homes and recreational sites. The Lake County Sheriff’s Office has issued evacuation orders for McDougal Lake, Sand Lake, the Highway 2 corridor and just north of Highway 1. Lake County Emergency Management has a Red Cross shelter up and running at the Finland Community Center for those who are displaced or unable to reach their homes due to the fire and related road closures.

As of Tuesday, the sheriff’s office had evacuated around 80 people from the area. 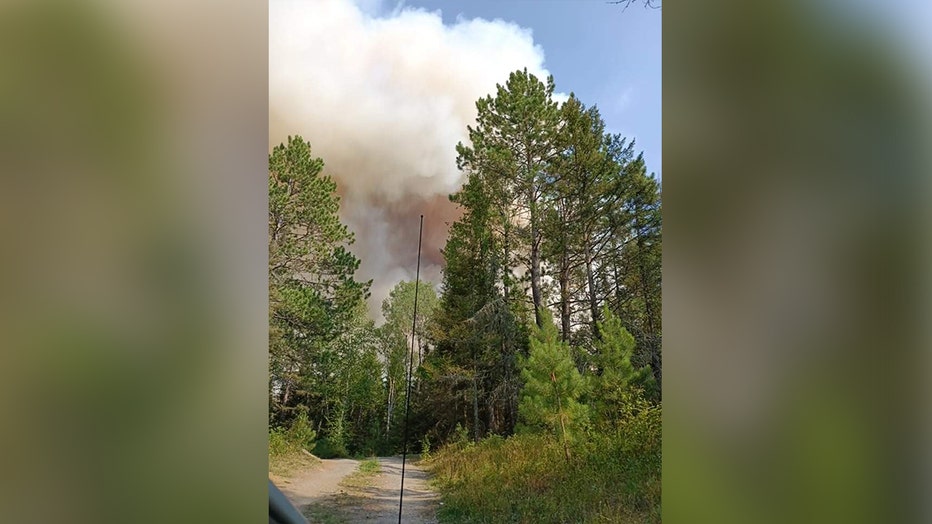 A resident took this photo of the Greenwood Fire as they were driving out of the area late Wednesday afternoon.  (FOX 9)

A Forest Service closure order is in place across areas within the Kawishiwi, Laurentian and Tofte Ranger Districts and a small portion of the Boundary Waters Canoe Area Wilderness. The order affects all lands, waters, trails, portages, canoe routes, BWCAW entry points and recreation sites within the closure area. However, private property owners can access private property.

According to the MPCA, smoke will continue to impact areas near and immediately downwind of the fire to the north and northeast through at least Friday as the fire continues to burn. Fine particle levels are expected to reach the Orange AQI category, a level that is considered unhealthy for sensitive groups, for the affected area.

Several additional fires are burning in the Superior National Forest.

At only 15 acres, the Whelp Fire is small compared to the Greenwood Fire. However, no firefighting crews have been sent in due to difficult access and safety concerns. Planes are continuing to drop water on the fire from above, which has kept it contained to its current footprint.

There are also several fires burning across the Minnesota-Canada border in Quetico Provincial Park, which the Forest Service said have the potential to spread into Minnesota near Crooked and Iron Lakes. BWCAW permits in the Crooked Lake and Iron Lake closure area have been canceled until Aug. 27.