Minnesota farmers get $1 billion in subsidies, but checks also go to ‘city slickers’

Minnesota farmers have collected more than a billion dollars in federal farm subsidies since the beginning of the trade war. Along with expected disaster aid and crop insurance, farm subsidies in Minnesota could reach a record $2 billion. &nbsp;

(FOX 9) - Minnesota farmers have collected more than a billion dollars in federal farm subsidies since the beginning of the trade war. Along with expected disaster aid and crop insurance, farm subsidies in Minnesota could reach a record $2 billion.

According to new figures released by the USDA, in the last three months producers have received $508 million in payments from the Market Facilitation Program (MFP), bringing the total to nearly $1.2 billion dollars since last year.

MFP was designed to help farmers directly impacted by the trade war with China.

The 10 biggest recipients in Minnesota were also some of the biggest farm operations in the state.

“Farm subsidies really go to the wealthiest of farmers and the largest farms,” said Anne Weir-Schechinger, a senior economic analyst for the Environmental Working Group (EWG), a public policy nonprofit that has been analyzing farm subsidies for 20 years. The group maintains of data base of farm subsidies nationwide.

“It is the small farmers who really need the subsidies especially during this trade war with the Trump administration. These small farms are not the ones receiving most of the money,” Weir-Schechinger said. 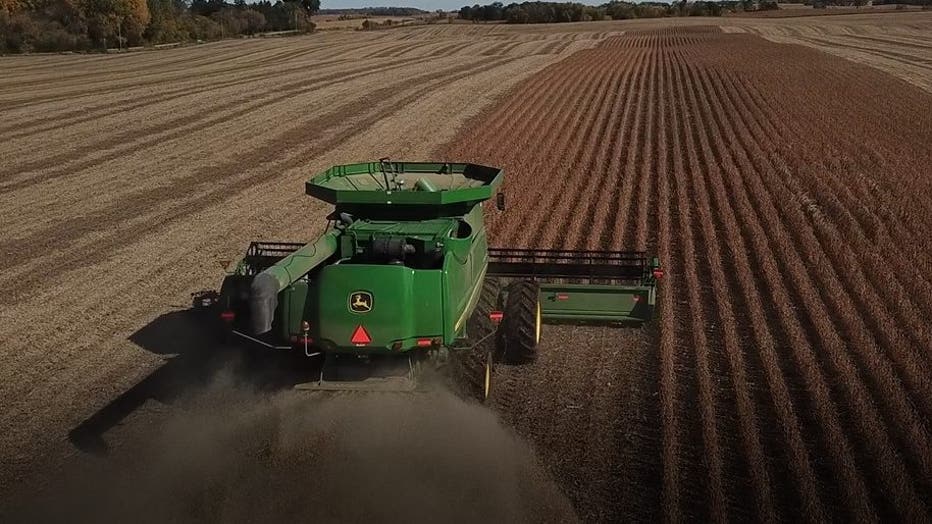 In fact, last year, the top 10% of recipients in MFP got 43% of the money, according to an EWG analysis of the data. That’s because farm subsidies are almost always based on acres, making it less about farming and more about how much land someone owns.

“There never really has been a lot of needs assessment. It goes back to when farm subsidies where created, there wasn’t a need assessment because the thinking back at that time was every farmer needs some help,” Weir Schechinger said.

The FOX 9 Investigators examined the USDA data base of farm payments under MFP, and noticed dozens of payments to some of the wealthiest zip codes in the state.

The money trail led the FOX 9 Investigators to the Chief Financial Officer of Faribault Woolen Mill who lives in Edina. Paul Mooty handles the finances for a family farm and the money goes back into the operation. He collected $37,884 in 2018.

It also went to the top of the IDS building in downtown Minneapolis, and a post office box for a trucking company, R D Brummond and Sons, which received $97,011 in 2018. The FOX 9 Investigators traced the owners of that company to a farm near Rochester.

On a private golf course in Blaine, the FOX 9 Investigators met Gary Reinecke, who received $13,171. He said he runs a land trust for his daughters.

“I don’t need the money and I don’t take the money; my daughter’s do,” Reinecke said.

His late wife owned the farm which is located in Illinois. The family now rents the land to other farmers, but shares in the expenses and consults about the crops.

He said if it wasn’t for the Market Facilitation Program, the family would lose money.

“And if we lost money too many years in a row we’d probably have to sell to a big corporation. We would not have family farms,” he added.

But overall, farm subsidies tend to benefit large landowners more than farmers, driving up land prices and rents. Today, 56% of the cropland in the U.S. is rented. And an absent landlord can live anywhere.

“That is a common theme, people who live in affluent areas getting payments for farm subsidies when they don’t live anywhere near a farm,” Weir-Schechinger said.

And it’s all perfectly legal.

Receiving money from MFP got more lucrative with last year’s farm bill, which allows not just spouses and children of farmers to collect subsidies, but cousins, nieces, and nephews. Those extended relatives can make up to $250,000, each, as long as they are ‘actively engaged’ in farming and don’t make more than $900,000 a year.

“The definition of actively involved is very vague. So you can call into a shareholder meeting every now and then a few times a year or other things like have some small financial stake in order to receive payments. So, you don't ever have to set foot on a farm to receive these payments,” Weir-Schechinger said.

ANSWERS MAY BE BLOWING IN THE WIND

The FOX 9 Investigators found another one of MFP’s recipients in an upscale Edina business park.

There was no Apache JV on the seventh floor, but there was a Geronimo Energy, a wind turbine company.

Twice the FOX 9 Investigators asked to speak to someone at their offices, and were turned away.

Using publicly available data, we tracked the Apache JV farm subsidies to Cottonwood County, about two hours southwest of the Twin Cities, and a Geronimo Energy project known as the Odell Wind Farm, where wind turbines tower over thousands of acres of soybean fields.

According to property tax records, the Chairman of Geronimo, Noel Rahn, and his family, own about two thousand acres of farmland in Cottonwood County.

Rahn, who runs a family investment business, also lives in Edina, in a home worth $1.3 million.

The FOX 9 Investigators knocked at his door, after our calls to Geronimo Energy were not returned. A message was left with the maid, but Rahn did not contact FOX 9.

It’s no surprise that city folks may be part of a family farm, through investments, trusts, or other arrangements. But, critics of farm subsidies, like EWG, say the money should go to people who are experiencing the economic risk and are actually farming.