A synagogue was destroyed in a fire Monday morning in Duluth, Minnesota.

DULUTH, Minn. (FOX 9) - Emergency crews in Duluth, Minnesota are responding to a fire at the Adas Israel Congregation synagogue.

Authorities were called to the scene at 3rd Avenue East and 3rd Street just before 2:30 a.m. Monday. Once on scene, the Duluth Fire Department says they found a storage room on the side of the unoccupied synagogue on fire. 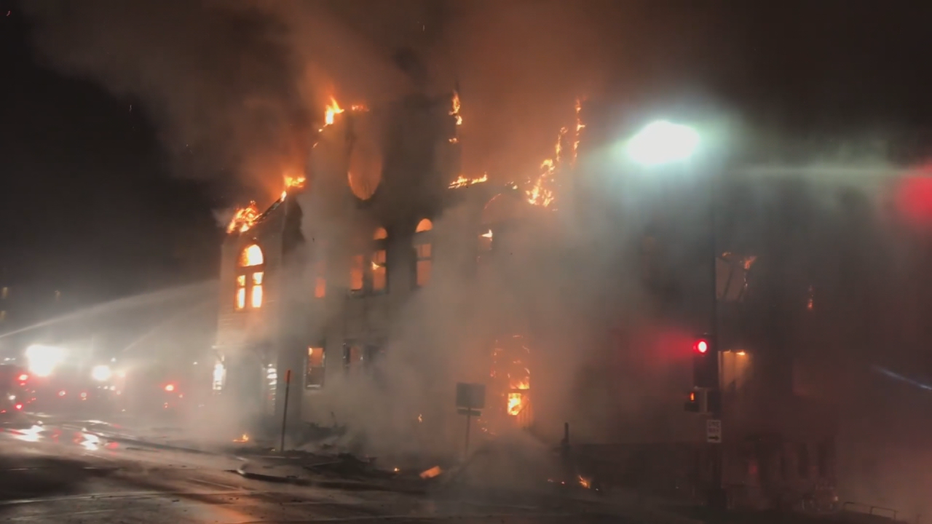 Crews fight a fire at a synagogue in Duluth, Minnesota. (FOX 9)

During a preliminary search of the structure, a "Mayday" call went out after a firefighter was struck by falling debris. The firefighter was rescued from the balcony level of the church. He was transported to St. Luke's Hospital where he was treated and released.

The conditions changed while firefighters were still inside the structure. Crews exited the building before a portion of the roof collapsed.

Crews respond to a fire at a synagogue in Duluth, Minn.

Crews fought a fire at a synagogue in Duluth, Minnesota early Monday morning. The cause is currently unknown.

Crews then began defensive operations as the fire continued to grow. Both the front exterior wall and the west wall collapsed.

Officials are looking into what caused the fire. Since it is still early in the investigation, authorities say they aren't ruling anything out.

The Jewish Community Relations Council for Minnesota and the Dakotas Executive Director Steve Hunegs  released a statement, saying the organization is "deeply saddened by the fire." The Minneapolis and St. Paul Jewish Federations is working to establish an emergency fund to support the needs of the Duluth congregation, he said.

“The Jewish Community Relations Council of Minnesota and the Dakotas (JCRC) is deeply saddened by the devastating fire that appears to have destroyed much of the historic Adas Israel Congregation in downtown Duluth, MN. The Congregation dates back to the late 1800’s and the building’s cornerstone was laid in 1901.

“As of 9 a.m., firefighters were still on scene. The Duluth Fire Marshall’s office is ‘currently investigating the cause and origin of the fire.’

“We thank the Duluth Fire Department and the Duluth Police Department for their swift response to this terrible incident. Our thoughts are with the courageous firefighter who was injured by falling debris while responding to the incident.

“As we approach the Jewish High Holy Days, we offer our full support to our fellow Jewish Duluthians.

“The Minneapolis and St. Paul Jewish Federations is working to establish an emergency fund to support the needs of Adas Israel Congregation.”

The JCRC will update this statement as information becomes available."