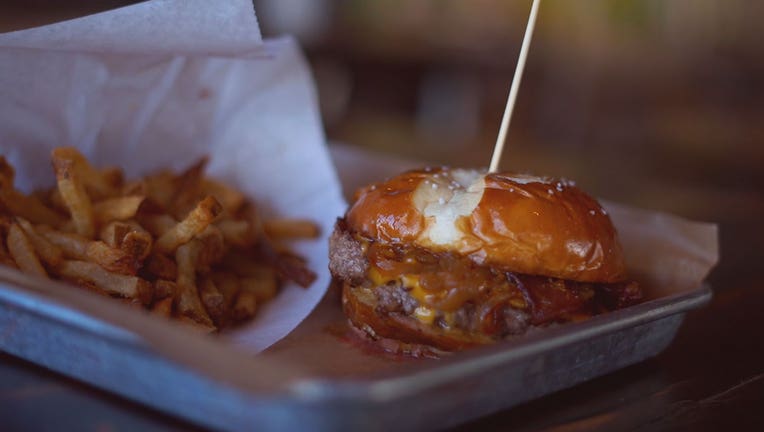 The Suburban, in Excelsior, boasts a burger that the restaurant claims will induce labor for pregnant women.

EXCELSIOR, Minn. (FOX 9) - The owners of an Excelsior bar claim an item on their menu is responsible for a mini baby boom.

The Suburban is known for its hamburgers, but one burger in particular really delivers.

The Labor Inducer burger, at Suburban in downtown Excelsior, was named after the co-owner went into labor soon after eating it. Now, 30 other mothers say the same thing happened for them.

Owner Cindy Berset says when she and her staff were coming up with options to enter in the Twin Cities Burger Battle a couple of years ago, a great idea wasn’t the only thing that was born.

"It’s so fun," said Berset. "It has been such a whirlwind. Every time a mom walks through that door, I know what she is coming in for and it’s the ‘Labor Inducer.’"

Berset’s daughter Kelsey, who is also a co-owner, had a bun in the oven named Sam. One burger in particular did much more than tickle her taste buds.

"I ate the whole thing and six hours later I went into labor," said Kelsey. "That was the burger we selected to go into the Burger Battle and when we were naming it, we joked, ‘Let’s call it the Labor Inducer because it’s the last thing Kelsey had before she went into labor.’"

The burger turned out to be a hit, coming in third for the People’s Choice Award. After the Suburban added it as the burger of the month, another pregnant woman ate it and went into labor, too.

Once word got out, pregnant women started flocking to the restaurant to get a bit of the famous burger. Even though there is no scientific proof that the Labor Inducer works, one after another believe it is responsible for helping deliver their bundle of joy.

So far, 31 women say they gave birth to their babies after chowing down. The rules say the woman has to go into labor within 24 hours in order to qualify for that count.

While most of the moms have been from the 5-state area, Karin Kaihoi actually bought a disassembled Labor Inducer and flew it to her daughter in Virginia, keeping it on ice in a cooler bag, and documenting their cross-country trek on social media.

Sure enough, the morning after reassembling and eating it, Shelby Prins went into labor, giving birth to her son, Brooks, on Labor Day.

A handful of the moms are pregnant again and most plan on seeing if lightning strikes twice.

In the meantime, Berset says adding some spice to the mom’s baby stories will always be a labor of love. She hopes she can host reunions for these women and their babies in the future, which could spurn friendships between the Labor Inducer babies years down the line.