Cameras captured hundreds of people attending a worship service Wednesday night, many of them without masks and ignoring social distancing guidelines.

REDDING, Calif. - Since the onset of the COVID-19 pandemic, gathering in large crowds has become taboo, but that didn’t stop a large group of worshipers from assembling at the Sundial Bridge Wednesday night in Redding, California.

The religious organization Hold the Line orchestrated the event, marking the first of five stops on its “#LetUsWorship" Tour.

Local officials were under the impression it would only be a small gathering, so there would be no need for a permit.

But cameras captured hundreds of people in attendance, ignoring social distancing guidelines — which discourage the public from being less than six feet away from the next person.

But according to KRCR, many attendees did not wear facial coverings — despite Gov. Gavin Newsom making them mandatory in public spaces more than a month ago. 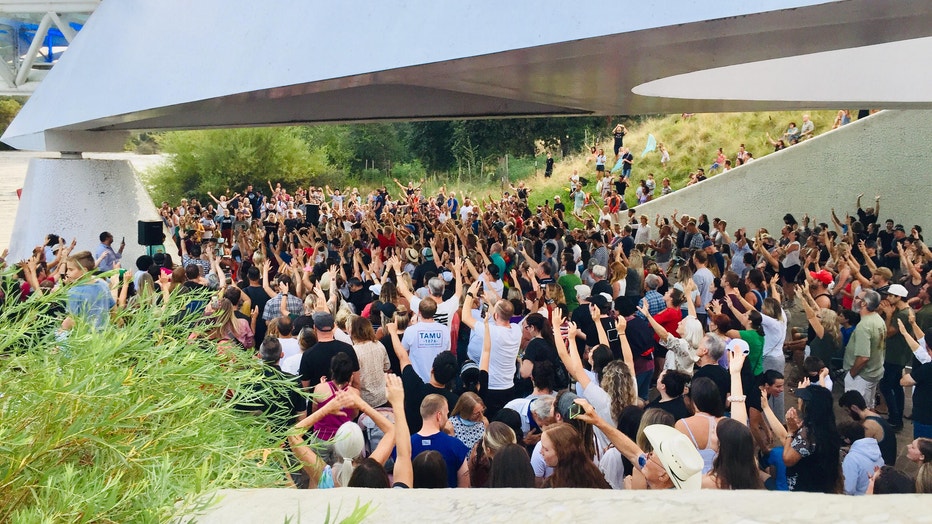 Cameras captured hundreds of people attending a worship service Wednesday night, many of them without masks and ignoring social distancing guidelines. (Credit: Robin Overstreet via Storyful)

The Golden State once received praise for being the first state to issue a stay-at-home order. Despite being the most populous state, California managed to limit the spread of the virus with its early actions.

Even so, much of the state began reopening in early June. Like most of the country, California’s cases went up.

Now, with more than 421,400 positive tests, California has the most cases of COVID-19 in the United States, according to data collected by Johns Hopkins University.