The 2015 bird flu outbreak decimated poultry flocks across Minnesota, and turkey farmer John Zimmerman has been on high alert ever since.

NORTHFIELD, Minn. (FOX 9) - The 2015 bird flu outbreak decimated poultry flocks across Minnesota, and turkey farmer John Zimmerman has been on high alert ever since.

"We are very concerned. We've been concerned since the last outbreak," Zimmerman told FOX 9.

His family has been producing turkeys at their Northfield farm since the 1950s and the news that the bird flu has been found in neighboring Wisconsin, South Dakota, and Iowa made his fears a reality.

"The sooner we can stop these smaller outbreaks, before they become larger outbreaks, the better off the whole industry will be," said Zimmerman.

In 2015, he was one of the lucky ones. Zimmerman didn't lose any birds in that outbreak, but other farmers in Minnesota weren't as lucky. Now, he's hoping the lessons they learned then will help spare their flocks. 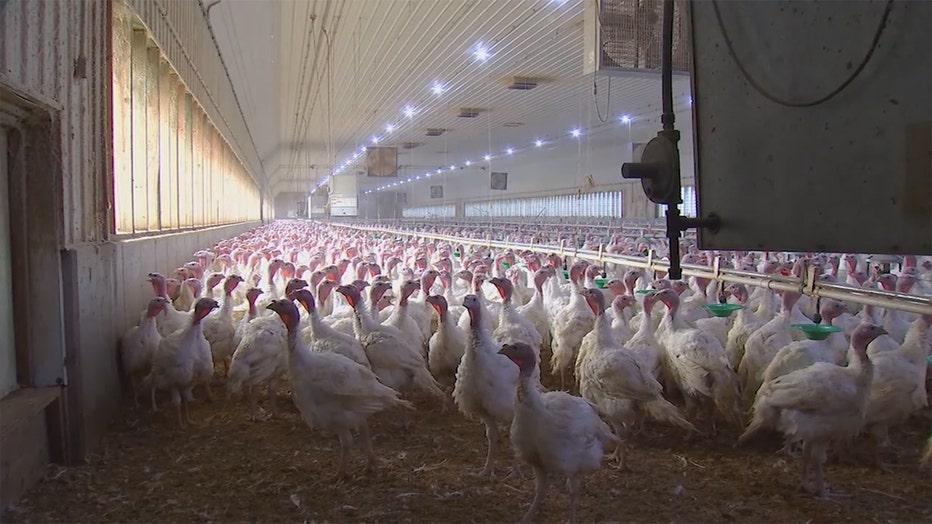 Poultry farmers are on high alert for the bird flu this year after a spread of it wiped out farms in 2015.

"We are just going to batten down the hatches for this next month or so, as the ducks and geese are still flying overhead, and while the temperatures are still cool," said Zimmerman.

He has bio-safety measures in place – like wearing protective gear in the barn – and says the birds will stay inside for the time being. What's especially troubling for him about this outbreak is that it's being found in backyard chicken flocks.

"It's not just the big guys that this can affect. If you have five to six birds in your backyard, they can be affected and if they are allowed to carry that virus, they can affect everyone around them... A fancy chicken or a heritage breed, or any other type of poultry can get this disease and die just as readily as a commercial bird," said Zimmerman.

University of Minnesota Poultry Extension Educator Abby Schuft has been working to spread the word about the spread of bird flu among commercial and hobby farmers.

If you have backyard chickens, she suggests limiting visitors and keeping their food inside so wild birds will stay away from it. If your chickens suddenly get quiet, stop drinking water or die unexpectedly, she advises calling the Minnesota Board of Animal Health immediately.

You can find more information on the bird flu for backyard chicken owners HERE.