Jon Cole has been the medical director at the Minnesota System of Poison Control for just over 10 years.

MINNEAPOLIS (FOX 9) - As the opioid epidemic continues to hit the country hard, public health experts are raising the alarm about a disturbing trend in emergency rooms: increasingly, the victims are small children under the age of 12.

Jon Cole has been the medical director at the Minnesota System of Poison Control for just over 10 years. During that time, he has seen the opioid endemic grow to the point where hospitals now administer the overdose reversal drug naloxone, known by the brand name Narcan, on a daily basis. Cases involving young children started becoming more frequent last year.

"We now regularly see cases of toddlers or small children reversed with Narcan after they've been poisoned. And that is something that I used to not see in my practice," Cole told FOX 9.

Cole asks people who consume drugs to make sure they are stored properly and kept out of the reach of children.

"For people who use opioids, no matter what reason that is, whether they're prescribed or not, those are potentially dangerous to small children if they're left out or lost or dropped," Cole said. "And seeing that as a potential risk to the small children that you live with, it's really important for people to understand that keeping that substance, whether it's a pill or something to be smoked or injected, up and out of the way and locked and kept safe from small children is really, really important."

Reflecting national trends, deaths from overdoses due to opioids have been climbing steadily in Minnesota since 2000 and spiked during the COVID-19 pandemic, reaching 678 in 2020, with preliminary data indicating a record-high death toll of 924 in 2021.

In 2019, there was a shift, with deaths caused by overdoses from powerful synthetic opioids like fentanyl overtaking those caused by heroin and over-the-counter painkillers like oxycontin. State data indicates deaths from synthetic opioid overdoses increased from 560 in 2020 to 834 in 2021. According to the Minnesota Department of Health, fentanyl was involved in 90% of all deaths involving opioids.

As fentanyl has become more prevalent in Minnesota, so have cases of children exposed to the drug. Fentanyl is often consumed in pill form, making it particularly dangerous for households with young children, who are prone to putting small items in their mouths.

Cole says the statistics kept by his department on fentanyl exposure are likely gross underestimations because the treatments (naloxone and ventilation) are so familiar for most emergency physicians that they don’t always report instances to Poison Control. Still, it’s possible to decern an alarming trend. 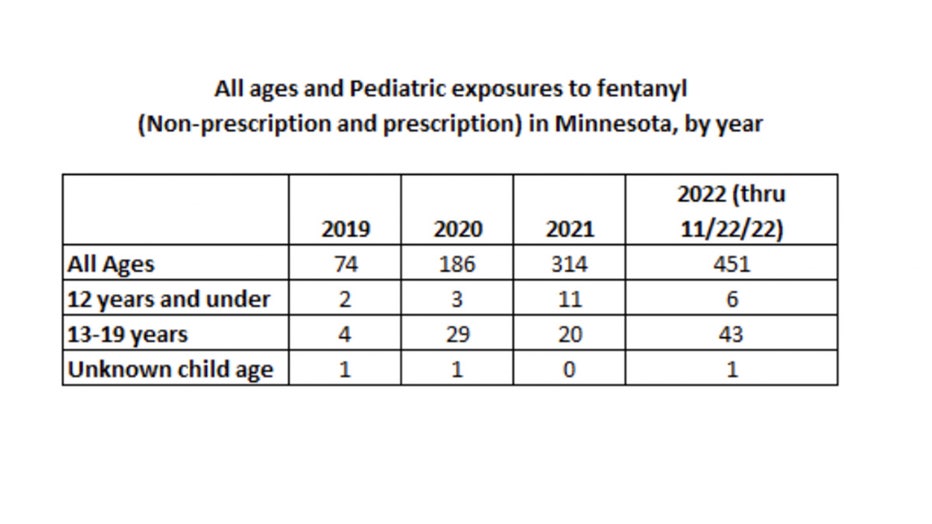 In 2019, Poison Control recorded two cases of children aged 12 or under exposed to fentanyl. Three more cases were recorded in 2020. The number then climbed to 11 in 2021. Six cases have been recorded so far this year.

Cole says the six cases in 2022 all involved children under age 2. Three received naloxone, and three were poisoned severely enough they were on ventilators. None died.

The Hennepin County Attorney’s Office has also seen a spike this year of child neglect cases involving children with illicit substances found in their system. County prosecutors have filed charges in 23 such cases since 2019, according to data the office provided. The year-by-year breakdown:

Those 23 child neglect cases encompass more than fentanyl exposure and also involve children who tested positive for methadone, buprenorphine, methamphetamine, cocaine, amphetamine, and in one case in 2022, THC.

While opioid overdoses spiked during the pandemic, they have not slowed down as some of the social impacts of COVID-19 have lessened. Medical providers like Cole have seen the human cost up close.

The director of the Minnesota Department of Poison Control wants the public and first responders to know that the anti-overdose drug naloxone, also known as Narcan, works, even for reversing overdoses caused by new, more potent forms of fentanyl and other synthetic opioids.

"It's disturbing to me how much more common it is for us to see overdoses from opioids now. It used to be much rarer. Now we see it every day. It's just a question of how many times we're going to see it that day. It's particularly sad to me because so many of these people are so young and have so many years of life in front of them," he said.

Cole added: "If we could help them with this problem that they have and the damage done to the patients' lives and the patients’ families’ lives… It's just it's really sad. And it's something that we work really hard to try to make better."