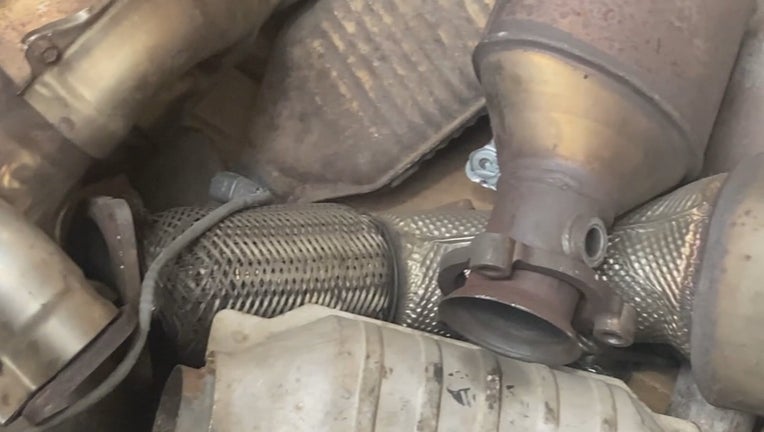 A box of catalytic converters.

BLAINE, Minn. (FOX 9) - A man wearing a clown mask was caught removing catalytic converters from vehicles at a dealership lot in Blaine, Minnesota, according to the criminal complaint filed in Anoka County District Court.

Matthew Jacoboski, 33, of Minneapolis has been charged with possession of burglary tools and first-degree criminal damage to property.

Catalytic converters contain precious metals and can be sold to scrap dealers. Twin Cities metro police departments have seen in an increase in catalytic converter thefts from vehicles over the past year.

According to the complaint, on Monday around 11:10 p.m. Blaine police officers responded to the Metro Auto Sales. Authorities had received a report that surveillance cameras captured one or two people going underneath cars in the lot to take catalytic converters.

When the officers arrived at the car lot, they found Jacoboski under a vehicle using a cordless saw to remove a catalytic converter. He was wearing a clown mask at the time.

After officers arrested him, Jacoboski admitted he was caught "red handed," the charges state. Police also found his bag, which contained two catalytic converters that had been sawed out from vehicles.

The owner of Metro Auto Sales told police it would cost $2,400 to repair the damage to the two vehicles.