The Fourth of July kicks off a new effort in Bloomington to rethink how we honor our veterans and teach the community about their service. Starting with on the holiday, veterans or their families can start purchasing a symbolic dog tag with embedded technology that brings the concept of veterans’ memorials into the 21st century.

BLOOMINGTON, Minn. (FOX 9) - The Fourth of July kicks off a new effort in Bloomington to rethink how we honor our veterans and teach the community about their service.

Starting with on the holiday, veterans or their families can start purchasing a symbolic dog tag with embedded technology that brings the concept of veterans’ memorials into the 21st century.

The location of the interactive memorial is planned for the green space behind the Bloomington Government Center.

"I can’t tell you how excited we are to be in this spot," Kate Blessing, board member of the Bloomington Veterans Memorial told FOX 9.  "It really tells our veterans, shows them your service and your name and your recognition we want to have for you really matters."

The concept envisions a place for families and veterans to reflect and remember with a unique design of suspended arches, what the architects call armatures.

"These armatures will come out of the landscape and there’ll be six of them for the six branches of the military, and they come together with the focal point of the American flag," Blessing said.

But what sets the memorial apart is the placement of symbolic oversized dog tags on each of the armatures. Each of the dog tags contains the name of veteran with ties to Bloomington and an embedded QR code. 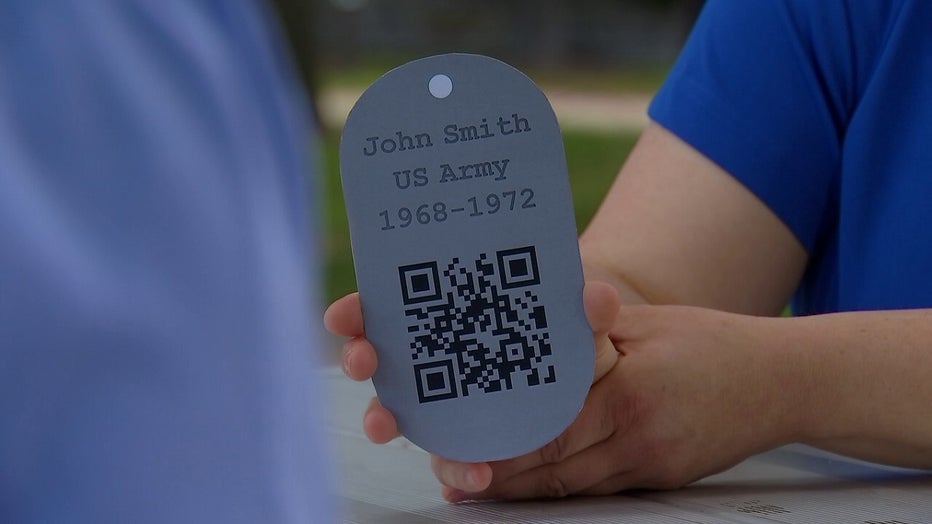 "It’s not uncommon for folks to have a smartphone these days," said Blessing. "So, they can walk up and say, well, I wonder more about John Smith. They can scan the QR code with their phone and it takes them to an online profile."

The QR code embedded dog tags are on sale starting on Independence Day for $350 on the memorial’s website.

The first Bloomington veteran to step and up and tell his story for the memorial is Bob Works. Works was a trumpet player in the Navy music program from 1960-64. He served on the aircraft carriers USS Independence and the USS Enterprise.  Bob’s story for the memorial centers on a funeral he played taps for upon returning to shore duty after leaving the Enterprise. Bob recalls the funeral outside of Charleston, South Carolina was the surprise of his life.

"We were on our way there to play with the rifle squad, and we found ourselves off the road. And I’m looking around as to where are we?" remembered Works.

"One of the members of the rifle squad just said, ‘We’re playing and doing this ceremony for a Black man, and Black people aren’t allowed to be buried in the cemetery here in Charleston,’" recalled Works, still shaken by the memory.

"I played as tenderly and as with as much feeling as I could, because this wasn’t fair for this person to be stuck away like that. It was a shame that happened," said Works.

These are the stories of service the Bloomington memorial and Kate Blessing hopes veterans will step forward and share.

"What were they scared of? What were they proud of? What really resonated for them in those moments?" said Blessing. "That’s when history really comes to life for people."

It’s exactly why Works wants other veterans with ties to Bloomington to join him in buying an interactive dog tag for the new memorial.

"It’s really important, I think, to emphasize what we serve our country for," said Works. "It’s time to treasure what we have. And this is one way to treasure it and one way to bring truth to others."