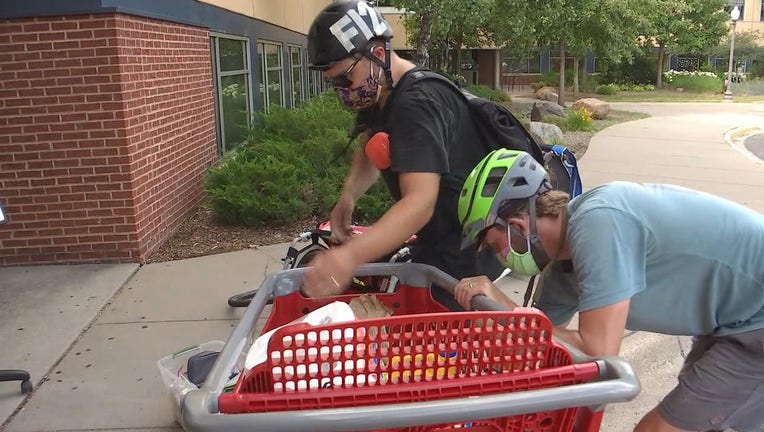 Bikes and Bites helps Minneapolis residents in need to supplies after the riots and looting that followed the death of George Floyd.

MINNEAPOLIS (FOX 9) - A local bicyclist saw a need in the community during the unrest after George Floyd's death, so he stepped up to help.

Since then, nearly seven days a week, Brian Boyer has been packing up his bike trailer with 100 pounds of household supplies and hitting the road to help those in need.

Bikes and Bites helps Minneapolis residents in need after the riots and looting left many without supplies following the death of George Floyd.

“We're really excited about seeing people inspired and inspiring each other," said Boyer.

Boyer started the group Bikes and Bites after he saw the outpouring of support for those left without access to basic necessities due to the lootings and arsons following the death of George Floyd.

A lifelong bicycling enthusiast, Boyer began collecting donations of baby products, soaps and shampoos and other non-perishable items from friends and neighbors and dropping them off at several community organizations along East Lake Street and Powderhorn Park -- all by bike.

“In the past when people like Philando Castile or Jamar Clark or Terrance Franklin were murdered, we liked things online, we signed petitions, showed our support. There was more distance. This time we knew had to get up and take action and do something differently," said Boyer.

Now Boyer says his pet project has a network of 50 or so people who either donate extra items they buy at the grocery store or ride their bikes picking up and dropping off donations in south Minneapolis.

This is Luke Cunningham's first trip with the group since moving to Minnesota from the San Francisco Bay Area a few days ago.

“To me, it was kind of a no-brainer, just to sort of give back, and the added benefit was that I get to ride my bike and get to know this new city that I’ve been here for all of one week," said Cunningham.

In addition to giving back to his community -- in this case, the Midtown YWCA -- Boyer believes Bikes and Bites helps create a sense of community, and he says being able to do that through an activity he loves is the best way to pedal into the future.

“You get to meet a lot of your neighbors that I've never had the opportunity to see and people who live a couple of blocks away or live on your block that you realize are passionate about the same things that you are, that care about the same causes that you are fighting towards," said Boyer.