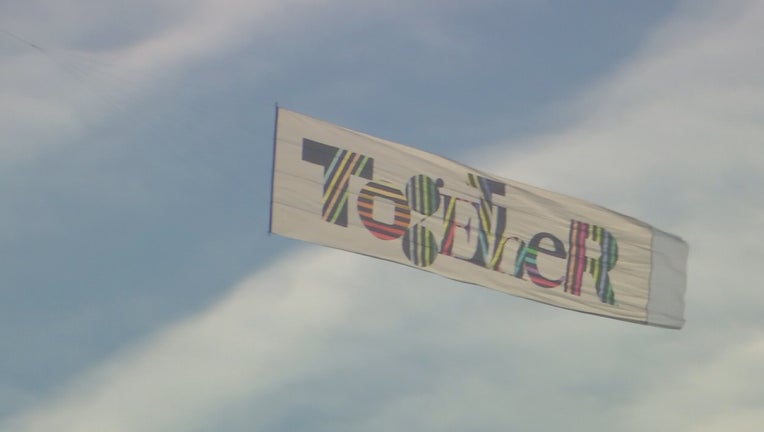 A plane flew a banner saying, "Together" over the Minneapolis downtown to share a message of unity amid a divisive election.

MINNEAPOLIS (FOX 9) - As Election Day nears, it seems like as a nation people are becoming more and more divided. Artists and musicians are hoping a high-flying display can help bring the country together.

For several hours on Friday, the word “together” hung over the Minneapolis skyline. While it was just one word, it carried one big meaning.

As Election Day nears, it seems like as a nation people are becoming more and more divided. Artists and musicians are hoping a high-flying display can help bring the country together.

“This is the simplest thing,” said Michael Curry, the creative director of the We Win Together project. “In a climate that has so many words right now and the crafting of those words, and the divisive language I just loved the simplicity and the notion of the word together.”

The project, which was put together by a nonpartisan group, aims to reignite the American spirit. Organizers say they believe the sky is the limit.

“Like a coach, making a little comment for their team when to play the tough game,” said Curry. “That’s the way I feel about it. It is nudging and encouragement and I wanted to make it in the simplest form possible.”

Contributors say it’s something about the visuals that speak to all those that see it.

“When is see that logo, I see a font that isn’t the same,” said Tabitha Dumo, a contributor to the We Win Together project. “One is a little big, one’s a little small, different colors with lines running through it. That is representative of who we are as a nation and the diversity that we have.”

The group is further emphasizing its mission of promoting togetherness through visual media, like projecting videos onto buildings throughout the Twin Cities.

“Just a reawakening of the American dream,” said Dumo. “Reminding people that when tough things happen you can easily think and focus on the negative. We’re in a pandemic, there’s a lot of things going on, but the American spirit is what can get us all out of this.”

Similar flights with a banner are taking place around the country.