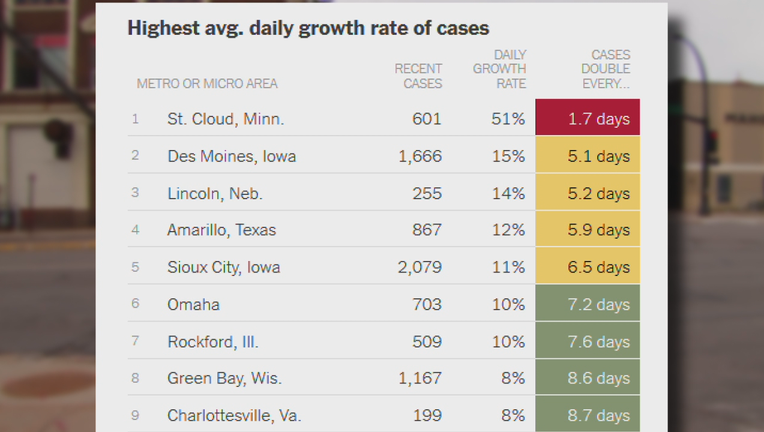 An analysis by the New York Times shows St. Cloud has the fastest growing amount of cases nationwide and could be the next big hotspot.

ST. CLOUD, Minn. (FOX 9) - A coronavirus outbreak in Stearns County is getting national attention after the New York Times labeled St. Cloud as the number one most likely place in the country for the next big flare-up.

A coronavirus outbreak in Stearns County is getting national attention after the New York Times labeled St. Cloud as the number one most likely place in the country for the next big flare up.

Dr. George Morris, the physician in charge of incident command for CentraCare, a care provider in central Minnesota, says his team is watching the situation closely.

“I think this is a concerning number and I will not shy away from that,” said Morris.

Morris says part of the reason this number has grown so quickly is because testing has significantly increased in Stearns County over the past few weeks.

“I think our testing capability has quadrupled in the past week or two,” Dr. Morris said.

He also says testing has been focused on people who were very likely exposed to the virus or are very likely carrying the virus, meaning they have a very high percentage of positive cases compared to the total number of tests they’re administering.

He says when CentraCare clinics started noticing an increasing number of coronavirus cases about two weeks ago and contacted the Minnesota Department of Health. One reason these outbreaks were especially concerning is because there are two large meat processing plants in Stearns County: Jennie-O in Melrose and Pilgrim’s Pride in Cold Spring. The plant in Melrose “paused” operations last week out of “an abundance of caution.” Meat processing plants have become hotspots for outbreaks across the country.

The Mayor of St. Cloud, Dave Kleis, says he’s gotten a lot of concerned calls from people who saw St. Cloud listed in the New York Times. He says this number can be alarming and misleading because testing was so limited before outbreaks started popping up at meat processing plants. He says while this number can look intimidating he’s more concerned about the number of cases that get so serious people have to go to the hospital.

“The numbers we’re concerned about are our numbers of hospitalizations, ICU beds, because that’s an issue [where] we need to make sure  first of all we have capacity,” Mayor Kleis said.

A representative for Hormel, the company that owns the Jennie-O plant in Stearns County says they are hoping to reopen that facility sometime this week.