(FOX 9) - After diving into fall last week with the first freezing temperatures in the Arrowhead and some 40s for the Twin Cities, we've seen a gradual shift back to summer. 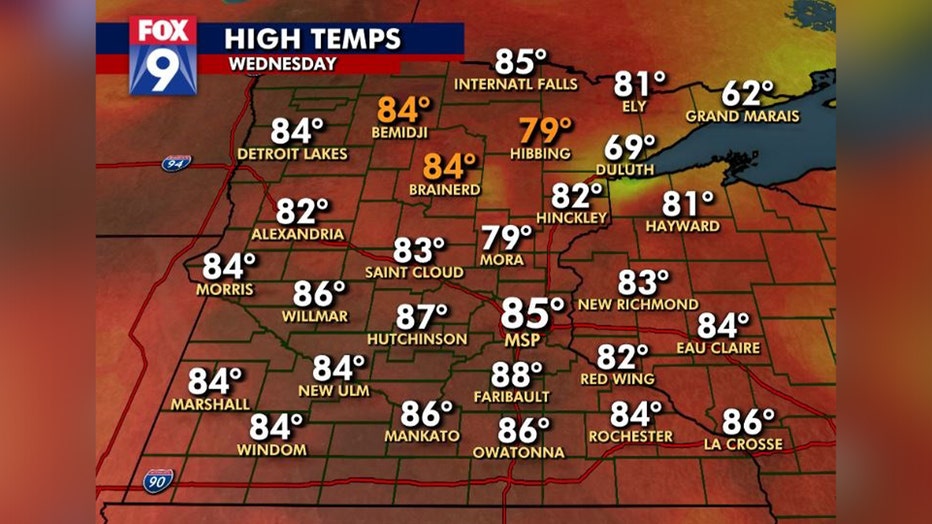 Temperatures likely peaked on Wednesday as highs surged well into the 80s, even some record daily highs falling in the north. The heat will gradually relax over the next couple of days as we become unsettled through the first half of the weekend.

But even with temperatures slowly cooling, it likely won't feel much cooler until Sunday. That's because dew points, the level of moisture in the atmosphere, will continue climbing which will likely offset the cooler numbers and make it feel about the same as it did on Wednesday.

Watch as the dew points gradually climb Thursday into Friday, as they head for the mid to upper 60s.

Our summer-style feel gets dialed up a notch Thursday and again Friday as dew points gradually climb back to the mid and upper 60s. That's not just swampy for this time of year, that's uncomfortable humidity for mid July. We'll hang on to that moisture until late Saturday.

This level of humidity is far more typical in July or early August, NOT during the first week of October. Relief finally arrives throughout the day Saturday from the northwest as a lingering and slow-moving cold front finally makes some progress moving east through the area. This will bring back the comfy fall warmth that we all love starting Sunday and likely heading through at least the first half of next week.

Get the FOX 9 Weather App to track fall weather live on your phone, with interactive radar, live streaming video of FOX 9 coverage and alerts and forecasts customized for your current location and favorite locations. Download it for Android or Apple.