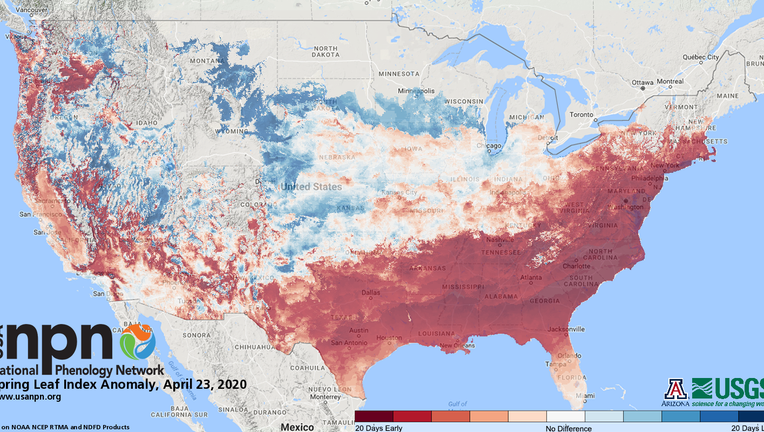 This images indicates which locations across the U.S. have experienced their spring leaf out so far by assigning a color to the areas whether it was earlier or later than the climatological average. The darker the red, the earlier the leaf out was re

It’s finally that time of year when much of the world transitions from its winter dormancy and springs to life. The grass is certainly greener and now some of the plants are beginning to sprout as they show their first signs of life in months. I’ve seen signs of life in my yard for a couple of weeks now, but I have a south facing slope that warms up much faster than the rest of the ground. But now the rest of the area has caught up and the National Phenology Network has officially declared spring leaf out in the Twin Cities.

The National Phenology Network tracks spring milestones to detect, fully understand, and record the lengths of each growing season. This can help track the overall seasonal patterns across the country, helping farmers, and those with a green thumb, make yearly decisions on what to plant and when to plant them.

Our initial spring leaf out is declared when lilacs and honeysuckles begin to show their leaves. These 2 species of plants were chosen because they are more often than not the first to show signs of life. This “leaf out” should not be confused with when the leaves begin to sprout on area trees. Because trees are much larger and their roots grow much deeper into the soil, it takes longer for their entire system to get warm enough to sprout leaves. The leaf out has more to do with plants, and more specifically crops, and when the ground is warm enough to spark germination that would allow them to grow.

The Twin Cities spring leaf out officially came in 6 days behind the climatological average, along with much of southern Minnesota and northern Iowa thanks to the late season snows. Much of the Midwest has come in within a week or so of average, but many parts of the southeast and east coast have had a very warm couple of months. Because of this, areas from New York City, to DC, to the Carolinas and over to east Texas, experienced their spring leaf out more than 3 weeks ahead of average. 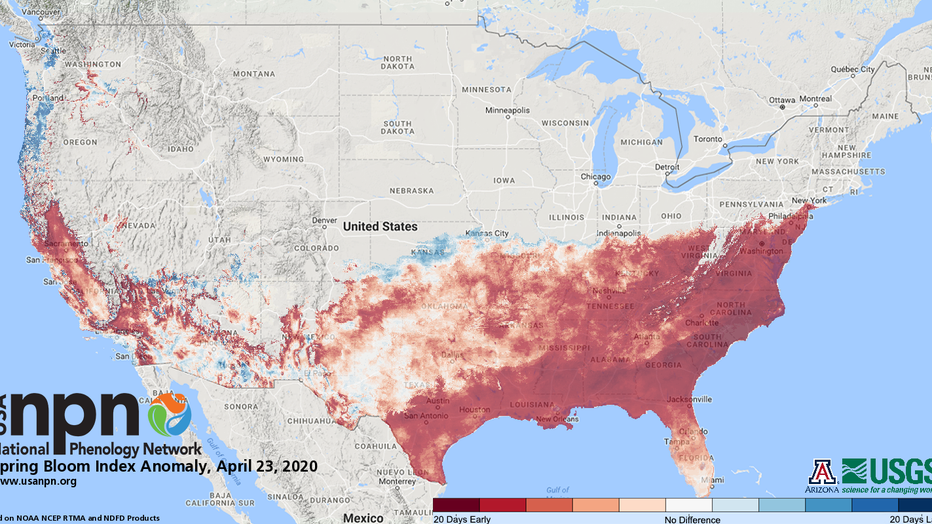 The colors indicate which locations across the U.S. have experienced their spring bloom and how that compares to average. Once again, the darker the red or blue colors, the further away from average they are in their respective directions. The Upper

Up next for the Twin Cities is the spring bloom. This is often times when most “average Joes” notice that spring is finally springing. This index is based off of the initial flowering of those same bushes, the lilacs and honeysuckles, but will often coincide with leaves beginning to sprout on area trees.  On average, the spring bloom shows up about 3 weeks behind the spring leaf out, but this is highly dependent on temperatures and moisture and can vary wildly. There have been many seasons where our spring bloom was well over a month after the initial leaf out because of cool and sometimes snowy weather. But if you want to keep track, the spring leaf out arrived in the Twin Cities April 21, which means the spring bloom should be here around May 10. I guess we’ll see.