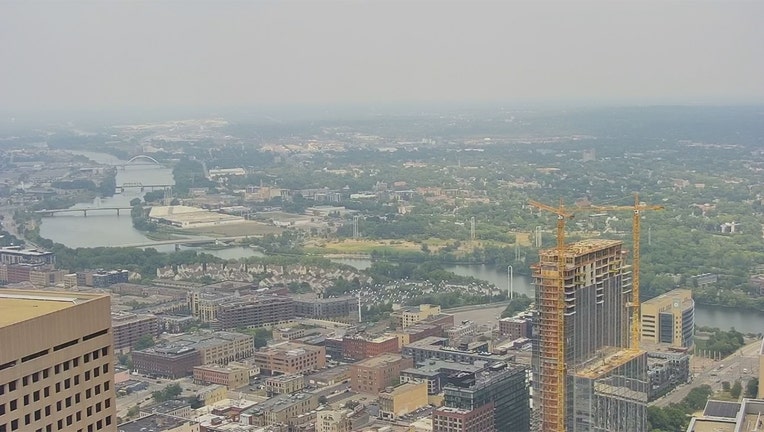 (FOX 9) - The smoky atmosphere that has had Minnesotans coughing and wheezing over the last several days may finally be on its way out.

A cold front over the weekend managed to scour out a lot of the smoke Sunday afternoon, giving many areas a break from unhealthy levels of soot. And now we may just be a couple of days away from clearing it out completely, at least for a while.

Light winds on Monday will create another stagnant day, allowing some smoke and smog to collect in spots. While it may be a bit hazy at times, air quality levels won’t be nearly as hazardous as what we experienced late last week and the weekend. Air quality will still be unhealthy for sensitive groups, but will be drastically healthier since this episode began on Thursday.

The poor air quality Minnesota has faced in recent days improved some on Sunday but some Minnesotans are still feeling the effects.

With light southwest breezes picking up Tuesday, more smoke will likely funnel through the Twin Cities, and much of the state from time to time.  But as southerly winds continue to increase for the rest of the week, much of the smoke that has permeated the upper Midwest over the last few days will finally get pushed out of here and back into Canada.

Unfortunately though, with Canadian wildfires expected to rage for at least a few more weeks, smoke will likely return at some point in the future.