Morning sunshine to afternoon clouds as we climb to a high near 30 on Tuesday. A dash to a coating of light snow is possible Tuesday night into Wednesday morning, with steady temperatures in the upper 20s. Then chillier and brighter highs in the teens on Thursday.

Tuesday will feature morning sunshine but then turn cloudy as high temperatures for the Twin Cities climb to near 30 degrees. A dash to a coating of light snow is possible Tuesday night into Wednesday morning.

Wednesday is expected to see steady temperatures in the upper 20s. Then things turn cooler — albeit brighter — on Thursday, which will see a high temperature of around 19 degrees. 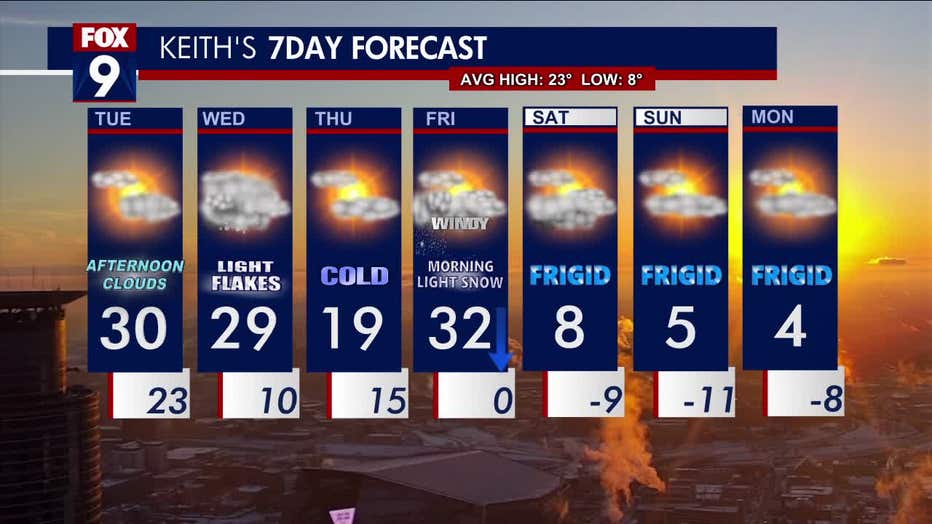 A clipper, which could dump an inch or two of snow, on Friday will send temperatures to about 32 degrees by lunchtime Friday. But temperatures will fall quickly Friday afternoon.

Then it'll turn frigid. The high temperatures Saturday through at least Monday will be in the single digits, with lows below zero.

Minnesota weather: How the snow this year compares

You are not imagining it...there has been a lot of snow this season. At this point in January, we are above the seasonal average. If we pick up the average snowfall for the next 3 months, it would give us about 75 inches for the season. That would be a top 5 season since 1990 and a top 10 since 1980.