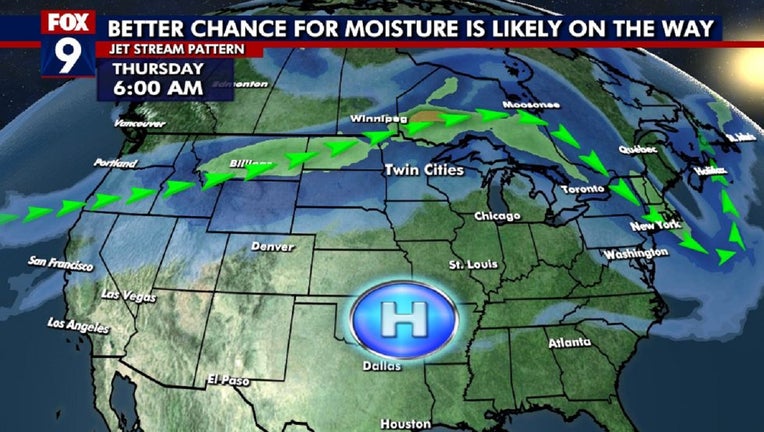 (FOX 9) - After the driest June in decades in the Twin Cities, it appears that we could be heading into an overall pattern that could give us some better opportunities for occasional, and maybe more consistent, moisture. Notice the previous sentence has plenty of words like "could" and "maybe" as all of this is far from certain, but there are some indications that the overall pattern across North America will be more conducive for occasional thunderstorms across central and southern Minnesota over the next week or so.

This pattern is often referred to as the "ring of fire." A ridge of high pressure and a heat dome centered over the southern plains develops and suppresses cloud and storm development in those locations. But the periphery of this dome often has thunderstorms that broadly circulate this high clockwise. That would create storms in the central Rockies with moisture pushing northeast into the northern plains, and then heading east and southeast to the southern Great Lakes and Ohio Valley. This pattern can be seen on longer-range models, giving meteorologists added evidence this may develop.

Check out the precipitation forecast over the next couple of weeks when comparing it to average: 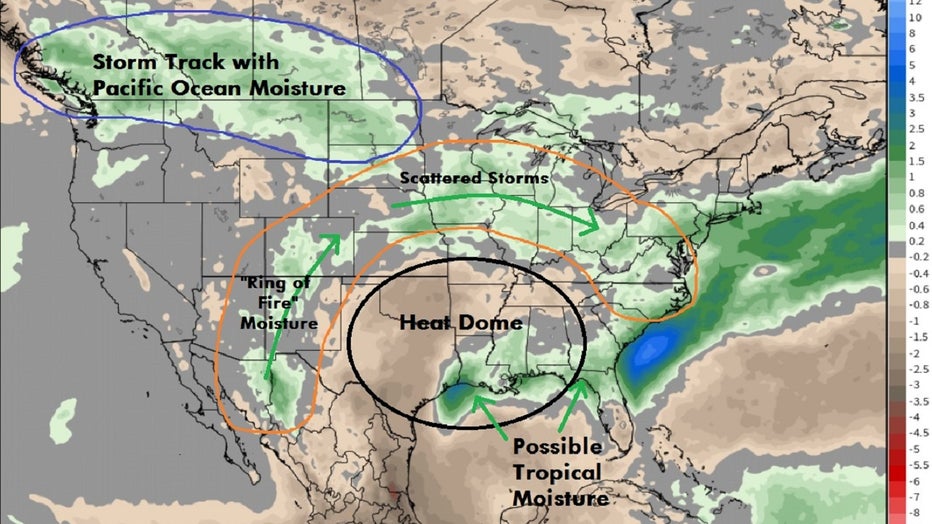 The computer model shows forecast precipitation when compared to normal with green shaded areas ending up with above-average moisture. For Minnesota, average rainfall would be roughly 2 inches over the next couple of weeks. This would indicate there would be higher-than-normal probability for more rain than that through mid-July. No way to know though if that comes in multiple waves, or just one deluge that often happens during the summer. I also added a few key explainers onto the map, with the heat dome developing in the southern plains leading to this "ring of fire" effect of scattered storms. Plus, the storm track rolls across the far northern U.S., which can be clearly seen across the northern Rockies. And then the potential for some tropical moisture from one or more systems along the Gulf Coast appearing as a "bullseye" of added moisture as well, potentially cutting into the dry heat dome, which is one of the very few ways the south can get added moisture in this type of pattern. 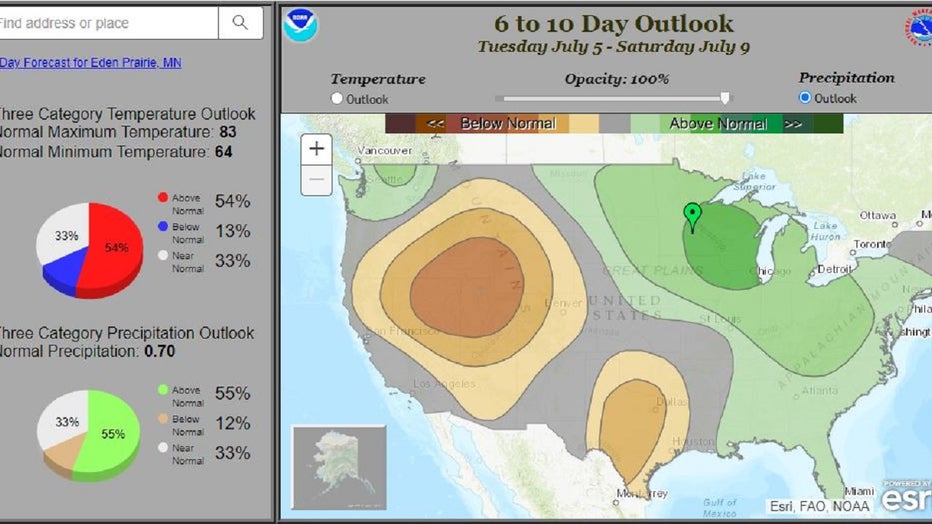 The Climate Prediction Center seems to agree this overall pattern is likely to develop at least for a few days. Their 6-10 day outlook shows a higher probability of receiving above-average moisture in that time frame, which extends through much of next week. You can see the overall probabilities on the left. Notice that these probabilities are for three variables, spreading out the percentages and making the risk factors a little confusing. Even with this pattern, there's still only a 55% chance for above-average precipitation in the Twin Cities, so it's far from a guarantee.

Now, before you start to cancel or change your outdoor activities for the long Fourth of July weekend, I have some good news.

Even if this pattern develops in the days ahead, there will likely be large breaks in some of the thunderstorm activity. Not to mention, the likelihood of any one location getting wet on multiple days is still quite slim. This is a very typical mid-summer-style pattern where you can be sunny much of the day, and then end up with a random rumble for a little while before conditions quickly clear up. Not to mention, many of these thunderstorm "events" can happen in the overnight or early morning hours when many of us are sleeping, leaving our awake hours dry.

We'll see what happens, but holiday or not, we need the rain.

The start of 4th of July weekend will be fantastic!