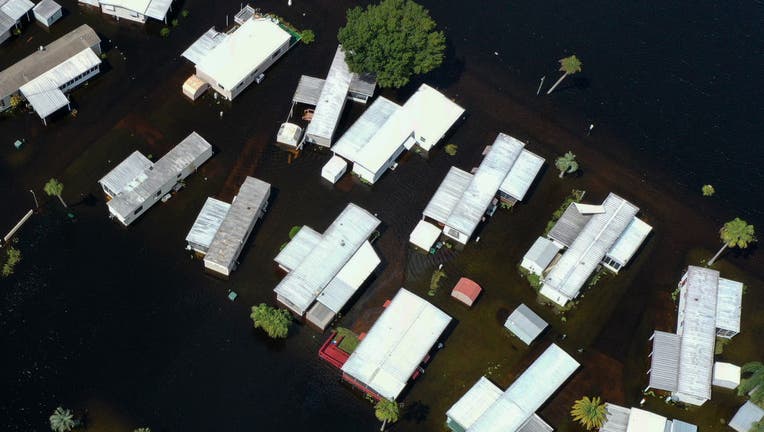 ST CLOUD, FLORIDA, UNITED STATES - 2022/10/04: (EDITORS NOTE: Image taken with a drone) The Jade Isle Mobile Home Park is flooded in this aerial view from a drone in St. Cloud. Residents of the community were issued a voluntary evacuation order due t

FORT MYERS, Fla. - One of the hardest-hit areas as Hurricane Ian hit Florida last week was Fort Myers. Residents there are just starting to come to terms with the loss of life and property.

On Tuesday, search and rescue operations continued in the Sunshine State, nearly a week after Ian made landfall in Southwest Florida as a powerful Category 4 hurricane.

First responders have been working 24/7 for the past week in what they call a complicated mission because of the amount of destruction and debris.

"We have a lot of people who are missing or unaccounted for, and we are committed to finding those people," Martin said.

Meanwhile, the painstaking process of clearing out one's possessions from storm-surge-riddled homes is in full force in surrounding neighborhoods and so is the reality that loved ones were taken by Ian.

"I have a couple friends on the beach that didn't make it, and some that are still missing," Fort Myers Beach resident Scott Safford said. "Hope for the best, fear the worst."

Martin’s team has been on the barrier island of Fort Myers Beach walking and climbing across the rubble. In the days immediately after the impact, they were pulling residents out from under the piles of destruction. It’s been a daunting and depressing process even for veteran first responders.

"I have been on the job for 30 years," he said. "Tears. Tears was my first reaction if I had to give you a word. Tears streaming down my face for what this storm has meant to my community – the community I have served for all these years."

Those who have returned to damaged homes and businesses after Hurricane Ian are figuring out the best way to rebuild. Politicians and community leaders in Florida are calling for change on issues like affordable flood insurance, the quality of housing and where to rebuild after so many homes and neighborhoods were washed away by Ian.

For many here, the loss of home and business is widespread and creating anxiety and intense grief. Add on the loss of life, and the mental anguish is unbearable.

Read more of this story on FOX Weather.